Transformers: Revenge of the Fallen
by SamoaRowe

Transformers: Rise of the Fallen is Dreamworks and Paramount’s big ticket bet for the summer, and so far it has paid off. It became the second fastest money making film in history (behind The Dark Knight) probably based on the appealing previews in which the Devastator was highlighted in all it’s glory at the end.

My first impression of the movie was that it had a lot of why I like Transformers in the first place, but even more so than the original film highlighted what I despise about director Michael Bay. For those of you unfamiliar with Bay, his resume includes summer blockbusters such as Armageddon, Bad Boys, and The Island. His style is to try and film events, rather than scenes, so we are treated to many swooping camera shots and brave men and women going on cliché heroic speeches. There are constant explosions and the action is all over the place, often to the point where you can lose track of what’s going on.

The movie doesn’t waste any time getting into the action, and sadly the first sequence is probably the best one in the film. The Autobots are now working with the U.S. government to hunt down the remaining Decepticons. Optimus Prime

is still leading the charge, but their battles with the hiding Decepticons have been becoming increasingly public and destructive. The adventures are costing the Autobots credibility with the White House, with a growing concern that perhaps the only reason the Decepticons are still on Earth is due to presence of the Autobots.

Shia LaBeouf once again portrays Sam Witwicky, and he’s got to be the oldest looking 18 year old college freshman on the planet (aside from his conspiracy theorist roommate, Leo). Megan Fox returns as Sam’s girlfriend, Mikaela, and her main role in the movie is to show off her cleavage as things explode around her. 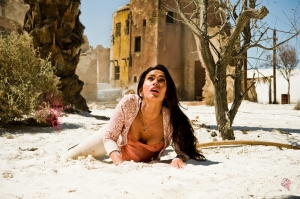 Early on in the film I found myself tired of the banter between Sam’s parents, I guess they were such a big hit in the first Transformers that they just had to be given increased screen time in this one. Bay manages to shoe-horn in a sequence where Mrs. Witwicky is so frantic on the college campus that she devours a pot brownie and starts acting even more "hilarious." In fact, the entire sequence of the parents dropping Sam off at college has got to be one of the most obnoxious in recent memory. Add in a half-assed subplot where Mikaela feels neglected by Sam’s distance in college, which is dropped about a third of the way into the movie because Bay remembered he was directing Transformers.

The Transformers themselves are awesome. Too bad they don’t get the main stage as often as they should. Optimus Prime is still the shining beacon of goodness and heroism in the galaxy. Megatron

, as you can tell from the trailer, makes his grand return in an awesome sequence where he destroys the naval fleet that was watching over his corpse. This leads to some good old fashioned moments where Megatron berates Starscream

for not being loyal during his absence. Soundwave is included, orbiting around the Earth and picking up all the useful secrets whenever the human characters say something they shouldn’t out loud (they are awful confident considering their adversaries can disguise themselves as ANYTHING!). The Transformer that gets most robbed for time is the Devastator

, who basically makes his big impressive entrance and then proceeds to do just about nothing. At least Darth Maul got to stab some Jedi scum before he got vanquished.

Despite all my complaining, the movie wasn’t going along terribly up until the drawn out third act. The battle in the desert was downright tedious. It was ADHD filmmaking at it’s worst, as no event was focused on long enough to develop properly and there was just too much going on. The end result was that the pay-offs to all the side stories just weren’t satisfying. Throw in some unneeded and out of place comic relief (haha, the Devastator has testicles!), a corny love subplot where Sam and Mikaela have a standoff to see who says “I love you” first, and just not enough Autobot vs. Decepticon action, and you will be left feeling deflated.

The movie ends in such a way that a third film can easily be produced, but I really don’t want any more if Michael Bay is going to be involved. The first Transformers (barely) worked for me because it had the influence of Steven Spielberg on it to counter Bay’s over stimulation. I also liked how the first movie went about building suspense to when we’d see the Transformers on screen in their glory. Someone let Bay off the leash for this one, and it somewhat ruins what could have been a truly awesome film franchise.