The Expendables (2010)
by erick Von erich

"It's like...someone invites you to a party and you don't show up. And it doesn't really matter".

Thanks to that line from 1985's "Rambo", I was able to add "Expendable" to the vocabulary of my 10 year old mind. Now, 25 years later, Sylvester Stallone is back with an entire battalion of flunkies to help me with my linguistic skills. In a movie that's as much of a fantasy as "Avatar" or "Lord of the Rings", Stallone's also bringing along a massive tsunami of in-your-face action combined with countless homages to action movies of the past.

Just like the "Ocean's 11" series of movies grouped together several noticeable actors from Hollywood's bright side, "The Expendables" has pulled together a gaggle of actors from Holywood's gritty side. Call them "Stallone's 11". Or 12, or 13. They've been billed as a "legendary all-star cast" but you have to wonder if guys like Jet Li, Terry Crews, Dolph Lundgren, Steve Austin, Jason Statham, Eric Roberts and even Mickey Rourke can be called "Legendary". Nevertheless, this movie has pulled together a wide assortment of actors; all of whom are familiar to any guy who has ever parked his rump on the couch to watch action movies on cable TV. In that regard, it's like those cheesy mid-budget flicks have finally been adapted into a full-blown "Summer Blockbuster Popcorn Movie". As you might expect, the finished product registers as more of a celebration of the entire action genre. Without paying much attention, I was able to pick up homages to "The Magnificent Seven", "The Dirty Dozen" and even Stallone's "Cobra" among others. 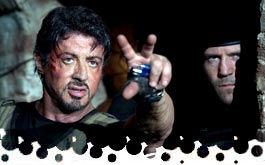 As the movie kicks off, the "Expendables" are a group of mercenaries or Soldiers or Fortune. Led by Stallon's "Barney Ross", the team includes Dolph Lundgren, Jet Li, Jason Statham, Terry Crews and Randy Couture. Mickey Rourke remains at home, as he's the closest thing to a Yoda these guys will ever have (it's likely that Rourke also remained home so he could film his scenes in "Iron Man 2"...where he appears looking almost identical). They're anti-heroes, but they seem to remain on the "good" side of things. For instance, in the opening scene, they take out a crew of those dastardly Somali pirates! Stateside, they indulge in all the male fantasy cliches: they ride motorcycles, have tattoos, drink hard, party hard, bust heads, listen to rock n' roll and pick up slutty chicks. Mickey Rourke's character "Tool" casually ignores his newest female conquest-- just some busty blonde he picked up. Can't remember her name, since he's had countless ones just like her. Yet beneath that gruff exterior, we find out that these guys have morals and a conscience. Statham and Stallone get the bulk of the spotlight as their characters each run into ...gasp...MORAL DILLEMAS revoling around broads. Errrr...dames... err, I mean yaks... err, I mean WOMEN.

The Expendables soon find themselves on a trip to the Latin American island naton of Vilenia. Which resembles the island of Catalina somewhat. Yeah..."Vilenia". They may as well have called it "BadGuySylvania" or "EvilLand". Run by a local general and former CIA man Eric Roberts, it's a militaristic dictataorship, home to Human Rights Abuses, broken farming equipment, water-boarding and other BAD STUFF. This can not be, in the eyes of the Expendables!

That's roughly your plot. You know what will happen, but it's fun watching it all unfold. You'll get GUNS, EXPLOSIONS, GUNS, FIST-FIGHTS, CAR CHASES, THRILLS and did I mention GUNS? Terry Crews' character of "Hale Caesar" almost steals the final 30 minutes with his armaments-- chiefly a Big Ass Gun that apparently has special ammo; the kind that can Blow the Living Shit out of Anything! It's an absolute guilty pleasure to watch Crews pull the trigger all 8,000 times. Indeed, when Crews enters the movie's final foray, I thought to myself: "now THAT'S my Roadblock!! Why couldn't they have put THIS in that shitty GI Joe movie?!!" Heck, along those lines I even thought to myself: "dammit, I want some Expendables Action Figures!" Then I remembered that I'm in my 30's and want to get laid a few more times before I die.

The fist-fights do no disappoint, either, as there's plenty to go around. Jet Li gets an extended spotlight before the team journeys to Vilenia. Once there, Stallone gets his clock cleaned by none other than Steve Austin, Eric Roberts' right hand man. Austin sticks around until the climax and if you've ever wondered: "who's tougher-- UFC guys or WWE guys", you might get your answer here.

This movie makes no pretenses. It indulges in the action and delivers a virtual non-stop experience. Sure, there are some holes and undeveloped characters-- like Li, who often hints at his family-- but that's to be expected. There are no unexpected twists; save for the much-hyped brief meeting between Stallone, Bruce Willis and Arnold Schwarzenegger (in an unpaid cameo); a scene that made me long for the mid 90's and the chance to dump 9 bucks on a burger at Planet Hollywood. This movie isn't about a message or making a point-- it's escapist male fantasy at its zenith.

"The Expendables" is bacially a two hour party. It really does matter if you don't show up at this party.