Fans, it's time once again for Halloween HavoK! It's been a few years since I've tackled a monster movie review, but in that time I've added countless "Oh, I Should Review THAT" movies to my various queues across Netflix, Hulu, Amazon Prime...and even Tubi. It's that last destination that has becoming a guilty pleasure for me, as it's full of what I can only describe as "Crappy Movies That Proliferated Cable in the 80's" (plus GI Joe cartoons). Which is where "Spawn of the Slithis" fits in. 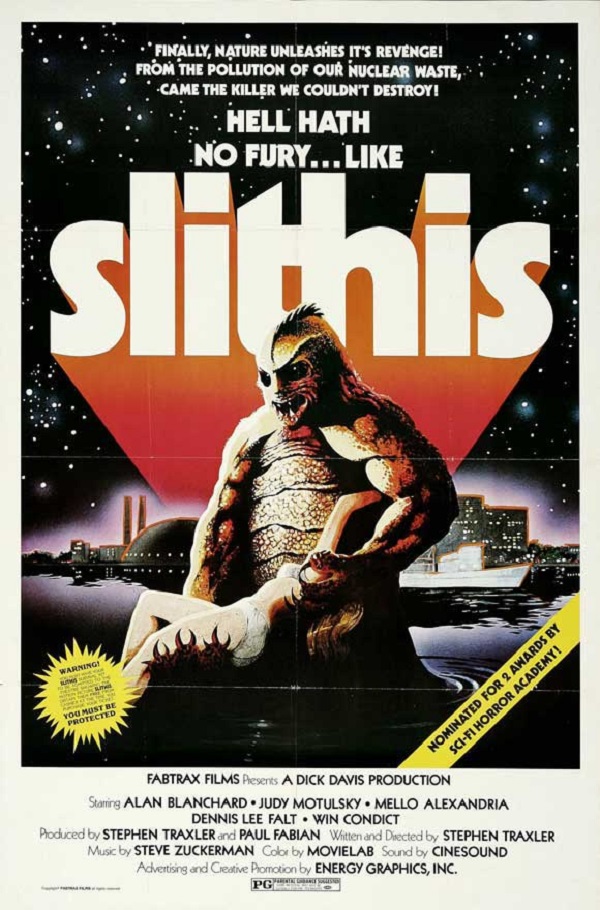 Created at the tail-end of the 70's midnight movie or exploitation craze, it fits the mold of movies that are just out to SHOCK you. In this genre, you'd get cannibals, gore, violence, sex n' nudity, dirty words, dead animals and all kinds of other socially unacceptable fare. Up until the advent of the giant multi-plex theaters in the late 80's, it wasn't uncommon for your local 2-screen theater or drive-in to run a "midnight movie"-- something you wouldn't dare take your wife and kids to (well... a lot of teenage kids would sneak into these, but we're splitting hairs). "Rocky Horror Picture Show" became famous for indulging in this scene and being campy. Whereas the original "Texas Chainsaw Massacre" or "The Hills Have Eyes" also became famous for indulging in this scene... and being shocking and horrific. It wasn't "hey man, I saw the coolest movie, last night". Rather it was: "dude! I saw the grossest flick, last night! A guy got his leg chopped off, there were boobies, and a cow got run over by a steamroller"!

So along comes "Spawn of the Slithis". Set in Venice, California, it's part "Creature from the Black Lagoon", part "Jaws" and part...."Welcome Back, Kotter". Well, "Kotter" without the humor. As the movie opens, you know it means business because we get this determined little bugger: 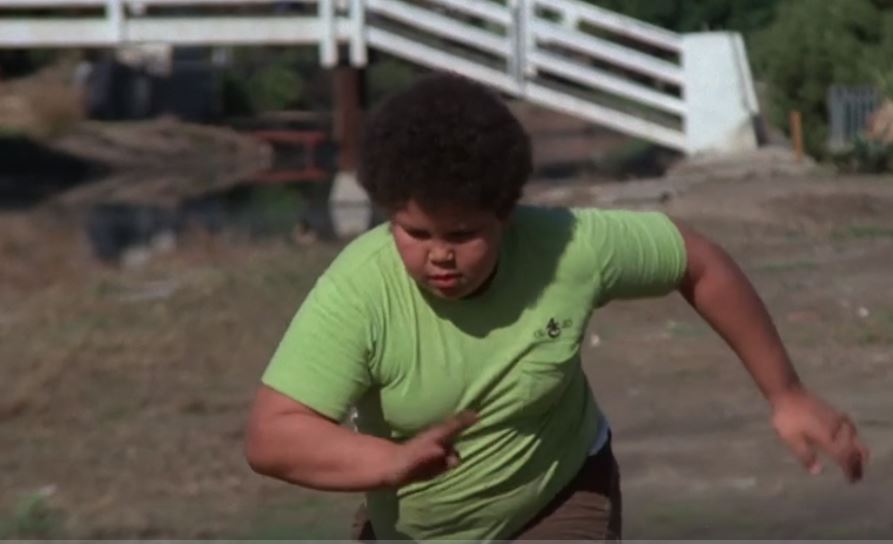 What's he runnng to/from? Well, he and his frisbee playing buddy have just discovered a mutilated dog on the banks of the Venice canals. Ew. I'd show a picure, but it's pretty graphic...and I'm not sure it's a prop from the special effects team. Rather, it's random roadkill that they've filmed. Wow...we are off to a depressing start. Oh, and don't worry about that beefy kid and his friend, because they'll never be seen again. Something which becomes a recurring issue for this flick.

It's not much later before another mysterious attack occurs. This time, it involves an old couple who are upset because (they think) their dog is barking. Of course, it turns out to be our title star, the "Slithis" monster. He can do awful things like tear open screendoors, spray Chick Fil-A sauce on you, and then kill/eat you. It has to be Chick-Fil-A sauce, because all the scenes that are supposed to have blood have orange sauce everywhere.

A panic is created in Venice, as people are told by the police that these recurring murders and mutiliations are part of a cult. At the Local High School, teacher Wayne Connors feels otherwise. Along with his girlfriend, "Jeff", Wayne enlists the help of his colleague, "Dr. John", the science teacher. They discuss their theories in Wayne's den, while drinking beer. Wayne is simply out to disprove the police, because his old "journalism instincts" need attention. Dr. John fills in a LOT of details about what could have created the monster, settling on nuclear waste and mud. Jeff... is just there to literally smile and look pretty. This Monster Huntin' team makes Clue Club looks like extremists.

Wayne's curiosity leads him to sneak into the old folks' home, where he's surprised by... a member of CHiPs. It's supposed to be a regular cop, but you have to surmise that the costume budget was limited. He spends quite a bit of time frisking Wayne, before they come to a friendly agreement. Don't worry about this cop, because he's never seen again. 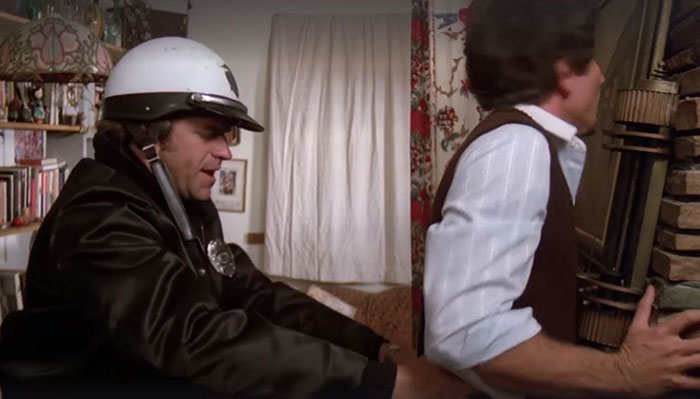 Just like that lil' monkey, George, Wayne's curiousity leads him on. This time he's led to the boardwalk of Venice, where another murder has occurred. Wayne (and the movie) spend about 15-20 minutes of walking around and talking to bums. In fact, you almost feel like you're watching "BUMS: the Motion Picture". It turns out that Wayne must find a bum named "Bunky"... but don't worry about him, because after talking to Wayne Bunky is never seen again. Although some of the extra bums return, in different roles, for the movie's finale'. Cuz' these guys just needed the screentime:

However, Wayne does find one interesting addition to his team, the ship captain Chris Alexander. Chris has more personality that all 3 of the other characters, as he's likable, jokes, has some skills, and smiles alot. Chris agrees to do some SCUBA-diving to look for evidence to suport Wayne's theory. The diving itself isn't incredibly gripping, but it's at least something to break up the constant discussion of "what caused this monster". It's almost like the director was worried somebody would pick apart and his movie and discover PLOT HOLES! Really? Somebody would do that for "Spawn of the Slithis? Criminy. 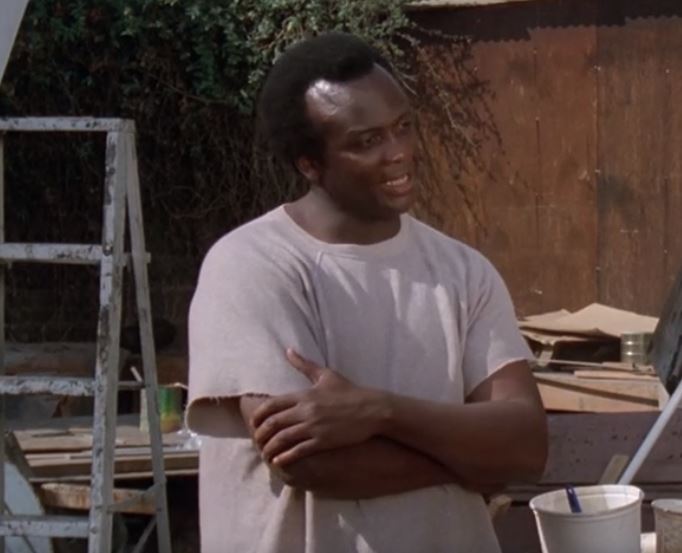 We finally get some action...sort of. In another random interlude, we're introduced to Doug-- a creepy guy in his 30's who picks up the teenaged Jennifer, who's run away from the Midwest and is looking to "make it" in California. Doug takes her on a date to watch... turtle racing. Yes, this happens. Afterwards, we're treated to another 10-15 minutes of Doug and Jennifer talking about their hopes and dreams, as they drive back to Doug's boat in his VW bug. Once there, they spend a few minutes talking to Doug's neighbor... who is promptly never seen again.

Why am I wasting time on Doug? Well, once they dispatch of the neighbor, Doug takes Jennifer below to his love deck... where he has red wine and candles, set out around a PICTURE OF HIMSELF. 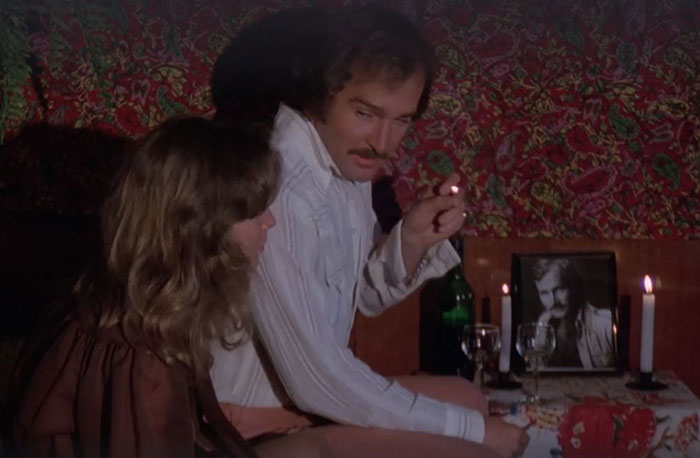 When Doug goes up top to lock the door, he tells Jennifer: "hey, why don't you get naked while I'm gone". Just stop the film and roll credits, because this movie can not possibly top Doug's smooth operating and/or get any scarier.

Oh...there's still about 20 minutes left. You can probably guess how this rolls. Doug and Jennifer are the next victims of the Slithis Spawn. Yet Jennifer shows the camera a "distasteful half boob" before she leaves. Wayne, Chris, Dr. John and Jeff concoct a plan to hunt and capture the "Slithis". Wayne and Chris are joined by two seamean as they try to evoke "Jaws". Jeff and Dr. John remain onshore and have a big encounter with the Slithis, which culminate in the big action scene of this flick: a station wagon is driven into the water!

Jeff and Dr. John escape, while the monster swims out to meet our main hero. The two seamen/bums are killed by the monster and we get the big Final Fight. Chris does most of the fighting, even clamping the Slithis with a big anchor hook for the "kill shot". Our two exhausted heroes refelct over what just happened, and decide: "it came from the sea...give it back". So they toss the carcass into the drink. You'd think that's the end... but you know how these "shock flicks" like to really conclude. 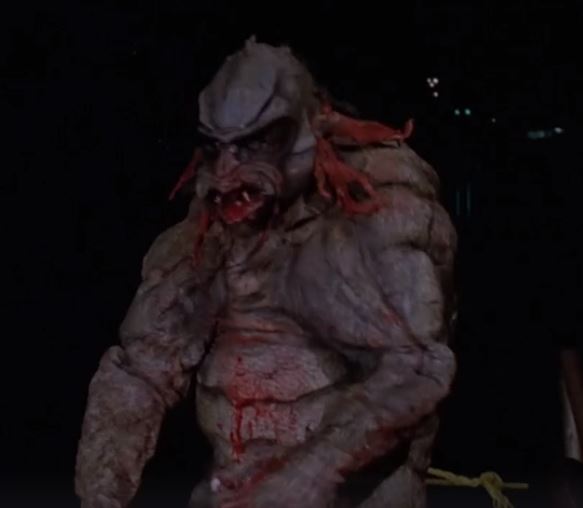 Why'd You Watch This?:
Egads... because it's Halloween HavoK. Otherwise, there's no fun in sitting through a boring, low-budget monster movie filled with Chick-Fil-A sauce. Yes, there are "so bad it's good" movies, but this isn't one of them. Too many long-drawn out scenes focusing on characters who are irrelevant to the plot. Fat frisbee-playing kids, bums, random high school students, cops, a worthless neighbor.... all who add nothing to the plot. I was thinking Wayne would assemble a rag-tag team of various people, but that wasn't the case.

On the plus side, there are (maybe) two positive aspects of this flick. Primarily, the Slithis monster is pretty disgusting and shocking. If you're looking for a gross out moment, just look at the monster. You might even be able to avoid the visiblle seam on the costume that is briefly seen in the climax. The camera also uses a fun low-tech "monster vision" effect, by simply placing a Coke bottle over the lens. It's not amazing, but you have to appreciate such a simple approach.

Is "Spawn of the Slithis" a worthy addition to your movie queue? Probably not, unless you're into cheese and are okay with the drawn-out, boring, dialouge scenes. There's nothig really scary in it, either. Unless you count Doug's Floating House of Romance. EEEEEE! Darn you, movie! Don't give me nightmares!