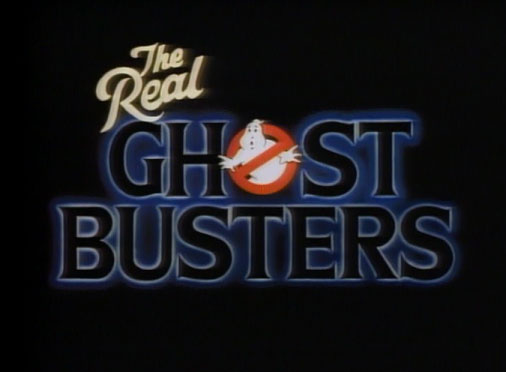 You're probably wondering what's the deal with the title of the series, The REAL Ghostbusters. I'll try to keep things as quick as possible so we can move forward into the actual recap of this Christmas themed "special" (I use that term loosely. It's a regular episode that happened to air a few weeks before Christmas in 1986).

I'm sure everyone is familiar with the source material, the 1984 motion picture starring Bill Murray, Dan Aykroyd, Harold Ramis, and to a lesser extent, Ernie Hudson (among others), centered around a ghost-hunting business in New York City. I know I'm really downplaying the awesomeness of Ghostbusters, but again, I'm trying to keep this quick. Before the title could get a greenlight from Columbia Pictures, permission had to be obtained from Filmation, who owned the title used for a short-lived series from 1975 simply titled "The Ghost Busters", starring two slapstick ghost hunters and their Gorilla sidekick (a man dressed in a Gorilla Suit).

With the success of Columbia Pictures' Ghostbusters, Filmation set out to capitalize on the name, still owning the rights to the name, and gave the green light for an animated series to debut in the Fall of 1986. Remember, this was back when all the major networks had high demand for Saturday Morning Cartoon, so everyone and their mother with a decent license would be able to catch a break with one of the networks. Of course, the Filmation version of the Ghostbusters would be a complete fake-out, ignoring the Columbia film version and recycling their old property with the two bumbling sons of the original Ghost Busters and Tracy the Gorilla, the "same" Gorilla that assisted their father's years back (but in animation form, so it's not another guy in a Gorilla costume). On the flip side of the coin, Columbia Pictures and DIC were looking to produce a series of their own, based on the more well-known and relevant Ghostbusters. With "Ghostbusters" already titled by the competition, DIC Enterprises one-upped them by giving their series the title of "The REAL Ghostbusters". And now you know the rest of the story. 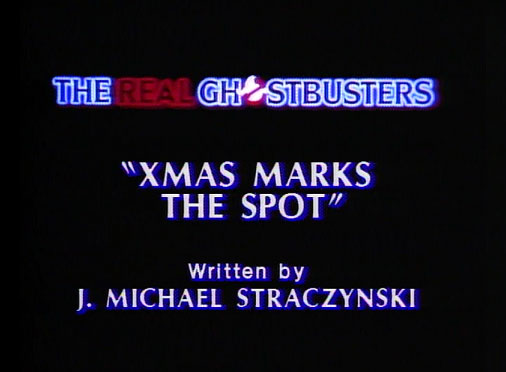 The episode begins with the Ghostbusters coming back from a job in Upstate New York, and everyone seems miserable about having to work on Christmas Eve (Boo-Hoo). Ray is distracted because he accidentally burned the fur off of a cat, which doesn't help because they're driving in the middle of a snow storm. They come across a fork in the road, and through some scientific reasoning, Egon suggests taking the left path. Little do they know they're going in the wrong direction!

The more they move forward, the more lost they get, and now the car is having a hard time moving along and stalls out. Peter seems the unhappiest, but that's quickly explained. He hates Christmas, the WHOLE CHRISTMAS SEASON, because his father, who we later (or earlier) find out is a sleazy con-man, was never home, so now Christmas is nothing but a hum-bug. I sure hope he resolves his life-long hatred of the season within the next 20-minutes.

Suddenly, a severe gust of wind blows the foursome back, and when they dust themselves off, discover a small town that looks suspiciously like it belongs in Victorian Era, Merry Old England. JUST IN CASE we didn't catch on to the fact they've just time warped, we see Bob Cratchit and his disabled son, Tiny Tim, entering the local Butcher Shop and picking up the most meager looking Duck for the families Christmas Dinner. The Butcher kindly reminds all us watching that he works for a miserable old miser named "Scrooge."

The Ghostbusters seem unaware that they've gone back 150 years and quickly go investigating some unusual paranormal activity. I'd say draw your own conclusion at this point, but then I'd be inviting everyone to stop reading this Christmas Recap, so stop thinking for yourself and keep reading as if you've never heard of Charles Dickens' Christmas Carol... I'm serious. No more free will, shut your brain off now, and pretend like you have no clue who Ebenezer Scrooge is. Ready? OK, let's continue.

The Ghostbusters arrive in time to see a spirit, carrying a collection of chains and weights. At one point, I thought that someone had the disgusting nerve of animating the ghost of Jacob Marley wearing nothing but underpants under his robe, but on further examination (because I don't know, I'm trying not hope this wasn't a disgusting intention), he's wearing slacks that match his skin tone, and he's not wearing underpants, but what looks like a chastity belt to weigh him down some more. Good heaven for that, I guess. The Ghostbusters barge in and discover an old man in his night gown being terrorized by three spirits. Thinking nothing of it, they blast the spirits and capture them in the trap. 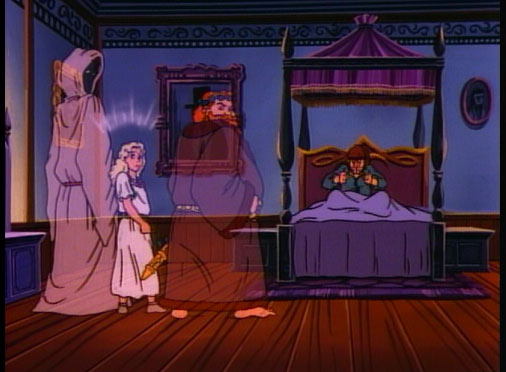 Ebenezer Scrooge is overjoyed by this occurrence, but quickly shows his true colors by being too cheap to pay the bill on their Ghost Busting, and begrudgingly offers them a shilling to avoid the release of the ghosts. Scrooge celebrates defeating the Christmas spirits and declares war on the entire season. The Ghostbusters return to their time, still unknowing of their travel, and come across something startling... everyone LOATHS Christmas, and to make matters worse, nobody even celebrates it anymore because HUM BUG. Everyone seems confused that the story of A Christmas Carol wasn't just a story at all. Scrooge even wrote a book and took credit for defeating the horrible ghosts! 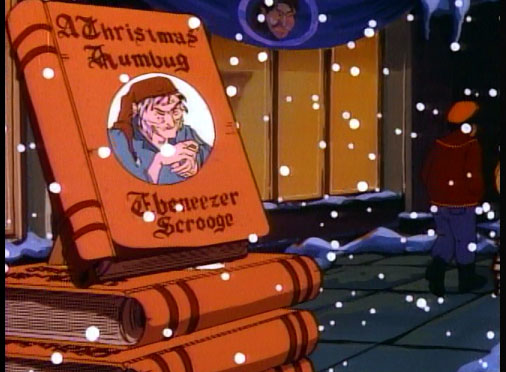 No Christmas also makes all New Yorkers rude and unkind to each other... wait a minute... Ray, Peter, and Winston hurry back to Headquarters, but it's too late: Egon has already disposed of the ghosts in their containment unit. The only way to let them out is to let out all the ghosts they've ever captured, unless they somehow could create a small opening and can guide the ghosts into the precise location to release them and only them. Egon, with the help of a reluctant Janine, takes the task of entering the chamber, and has only 60-minutes to emerge, or he'll be stuck forever. Meanwhile, the others must find their way back to the 19th century and undo everything they've done. In most scenarios, this would seem impossible, but they accomplish the goal quickly and with ease. 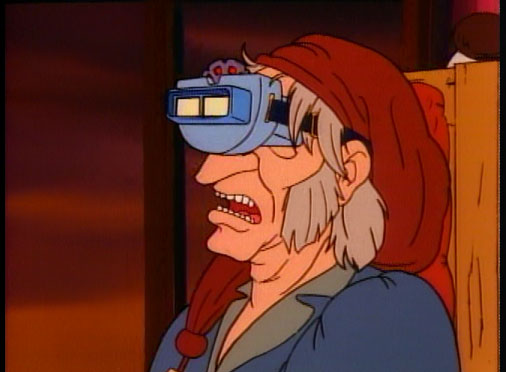 Peter, decked out in a tutu and a blonde wig, dons the persona of the Ghost of Christmas Past, and clumsily swings through the window, crashing on top of Scrooge, knocking his glasses across the room to give him a better chance to confuse the old skinflint. A bit of modern (by 1986 standards) technology adds to the effect, including one of those slideshow photo toys (View Master?). Wow, I feel really old knowing I had a few and hated them, even as a kid. Scrooge is unimpressed and doesn't change his mind based on his past. Peter, on the other hand, has seen the errors of his ways.

Winston, disguised as the Ghost of Christmas Present, swings Scrooge around to look down on the city, but Scrooge is a coward and covers his eyes, so it seems like the plan isn't working. As for Ray? A game of charades. Thankfully Egon arrives in time (where's the magic portal? I want to time travel this easily!) and releases the real ghosts, with Egon taking on the duties of Jacob Marley. The Ghost of Christmas Present kindly dresses down Peter before guiding the Ghostbusters back home, where Christmas is a thing that most people still enjoy. If 9 people singing Christmas Carols isn't enough to convince you that the entire world is happy to celebrate Christmas, then I don't know what will. God Bless Us, Everyone. 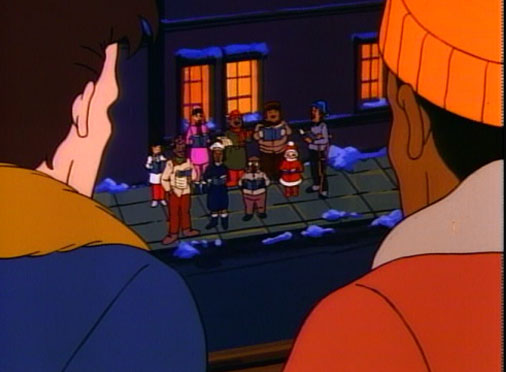 The Real Ghostbusters had the unique situation of getting to do a different spin on the Christmas Carol formula. Instead of rehashing the story for the 1,768th version of the story, they have the Ghostbusters accidentally capture the spirits of Christmas and force them in a situation to undo their good intentions and make everything right. It'll never make a list of great Christmas Specials, but there's enough charm in taking a different spin on a classic tale and delivers a few good laughs, as well as the cameos of all the ghosts inside the containment unit that the Ghostbusters had captured up to this episode of the series.