- Welcome everybody to something just the smallest bit different than normal. For Halloween Havok 2016; everyone's favorite month long celebration of everything spooky and Halloween-ie...? Halloweenish? Err, Halloween related, I've decided to delve into a former childhood obsession of mine. Obviously, I'm talking about "Street Sharks". No, of course I'm referring to the "Mighty Morphing Power Rangers" and, as it is Halloween Havok 2016, more specifically the Ranger's first ever Halloween themed episode, "Lord Zedd's Monster Mash". Yes, "Mash". Not bash. Sad to say, we won't see Zedd and Rita getting groovy to Bobby Pickett's classic Halloween jam. Nope, instead we'll see some blatantly overdubbed dialogue, reused Japanese stock footage, and more recycled monster costumes than a Spirit Halloween store's yard sale. But, how's it all going to hold up? Let's get spooky and go take a look.

Awesomely, the first thing we see post the typical episode intro is a closeup of a pumpkin. Call a spade a spade here, but the episode isn't subtle. 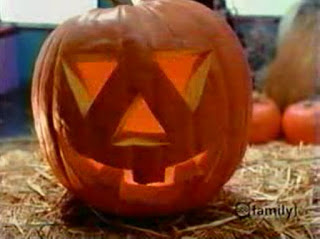 So, this is a Christmas episode, right?

Of course, our wonderful Power Rangers are involved in a community outreach program, as Billy the Blue Ranger (dressed like Albert Einstein) and Kimberly the Pink Ranger (dressed like, I don't know, Rapunzel or something) are preparing to take some children out trick 'r' treating. They speak briefly about some "World Peace Conference", that as most Rangers fans know, became a way to write the show's original Red and Yellow Rangers out of the program. But that's neither here nor there for this episode.

Eventually, after a brief interaction with one of the milquetoast adults of the series, who, in an obvious example of how the Power Ranger's version of "reality" in no way mimics our own, is happy that a group of teens are chaperoning the children, we see Tommy The White Ranger walk in (dressed like a pirate). After some meaningless chatter, we cut to Rita Repulsa and Lord Zedd's Tower Base of Evil On The Moon.

Zedd there, apparently all by his lonesome, explains his plans to Goldar and the other idiots he keeps around for no real reason. (Seriously, there's like one episode where Baboo the monkey dude sees combat and he's as ineffective as anyone else.) Zedd's going to trap the White Ranger, and have him battle an army of monsters, without his other Rangers for help. That's surprisingly forward thinking for a villain who literally used the same plan every episode, every week despite being beaten every single time.

Back on Earth, Bulk and Skull show up, both dressed as Roman centurions. They embarrass themselves by eating hot candy and we can check "Bulk and Skull do something dumb" off our "Power Rangers Episode Bingo Card".

On the moon, Zedd tells his army of Puddies to "disguise themselves as humans". Which they do. Apparently meaning they can just.... do this at will? What the Hell? I know Zedd was never a master of subterfuge and planning (see above where I mentioned he used the same plan every week, every episode and always lost) but this newfound ability really seems like something that could come in useful. Of course, its essentially never used again. Also, Halloween reference, because the Puddies get to dress up in costumes. And they disguise themselves as children. Which is just... weird.

Moving on; of course Tommy The White Ranger takes the Puddy Kids (Kuddies? Pids?) out Trick 'r' Treating and... wait just a damn minute here. The Puddy Kids disguise themselves as children dressed like Power Rangers? And this doesn't raise any particular questions? Its not like the "media" or what passes for the media in the Power Rangers universe ever really talks about the Rangers. They're not regarded as "heroes" by the general public. Hell, they destroy city blocks every time they battle a giant monster. If anything, they'd get the Spider-Man "menace" treatment. 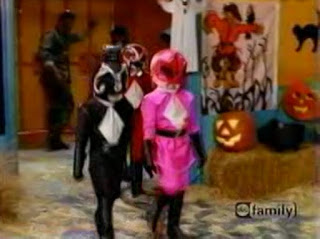 Tommy tries to suss out the identities of the "children" but obliges their silence by letting them keep their "secret identities". Fair enough.

Meanwhile, somehow Bulk and Skull believe the Rangers have the ability to shrink and grow at will and harass some poor kid dressed as the Red Ranger. It goes as well as you'd think.

Even more meanwhile, Tommy is walking with the Mute Ranger Puddy Kids. Moments later, Goldar materializes out of nowhere, the Puddies turn back into their normal form, and despite in literally hundreds of other episodes, being able to kick the asses of multiple Puddies and even more powerful monsters unmorphed, Tommy is easily captured by the goons following a brief fight.

Tommy winds up locked in Zedd's never before mentioned or seen "Dark Dimension" And when I say "locked in", I literally mean "locked in". As in, well.... see for yourself. 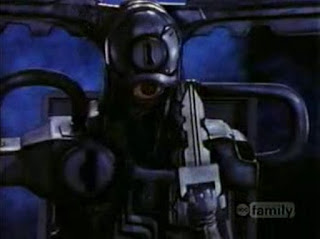 Say what you want about Power Ranger's monster designs, but this is the guy you want when you can't find your car keys.

Zedd's "Dark Dimension" is basically a big, empty woodland area with a lone tombstone in it. Kind of creepy for a kid's show. Tommy tries to morph, but is immediately beset upon by a guy with headstone for a head and an anthropomorphic goat. 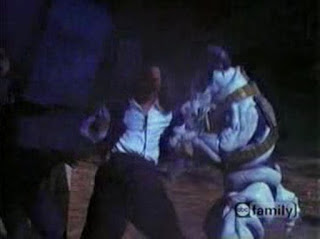 The last thing a crystal meth user sees before they die.

Oh good Lord. The monsters briefly threaten Tommy, before the appearance of The Pumpkin Rapper, who is.... *sighs*.... an anthropomorphic pumpkin with an upside down Jack O' Lantern face who speaks only in forced rhymes. God help us all here, folks. There's stupid and then there's Power Rangers Stupid.

Tommy immediately breaks free, lays two of the monsters out and runs. He's doing better against three of Zedds "most powerful creations" than he did against five of Zedd's low-level foot soldiers earlier. Consistency?

Back on Earth/our dimension, Kimberly and Billy try to contact Tommy. They can't reach him, so they run to Zordon for help. Of course, the all-knowing head in a fish jar knows what's up, but for reasons unknown, didn't bother to contact any of the other Rangers about it. Good mentoring, Zordon.

Back in the Dark Dimension, Tommy's still holding his own, but the numbers are starting to catch up to him. He gets thrown to the ground by the Headstone guy. Zordon and Alpha-5 manage to figure out how to transport Kimberly and Billy to the Dark Dimension, but can't call on the rest of the Rangers for help. Because they're still... taking kids trick r' treating? Really? I mean, I know Halloween is cool and everything, but couldn't they just, I don't know, lie to the kids and tell them an emergency's come up. I know. I know. Logic in Power Rangers. Of course, the newly arrived Rangers kick the monster's asses. Tommy gets his morpher back and transforms. Headstone head guy decides to bolster the monster ranks by randomly resurrecting... uhh... well... these guys... 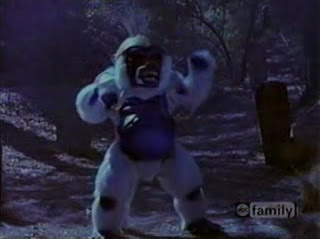 "My Pet Monster" all grown up and ready to kill. 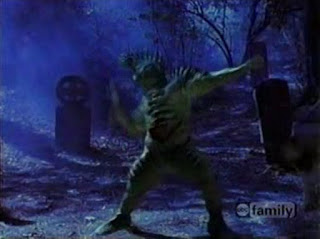 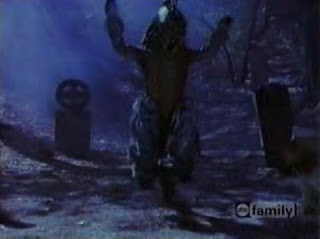 A snake with snakes for legs and snakes for arms. When Zedd picks a theme he goes all-in.

Of course, the combined might of 3 of our 5 Rangers kick their asses easily.

So, to recap briefly; One unmorphed Ranger taken completely by surprise was able to hold his own against three of Zedd's "most powerful creations". Three morphed Rangers have been able to handily take down six of them. And this was Zedd's biggest master plan. If this was plan-A what was plan-B?

Back at the Command Center, Zordon comes to his giant-headed senses and sends Alpha-5 to take over for the Red, Yellow, and Black Rangers. Because he's a robot and its Halloween. Duh? You're telling me nobody thought of this until right no-.... Power Rangers logic. Sorry.

Blah-blah-blah. The other Rangers show up. Pumpkin Rapper (and oddly, only him - none of the other monsters) is grown to giant size. The Rangers call upon their Zords, they use their Power Sword thing. He dies and they escape the Dark Dimension in some nebulous and never explained way.

Back on Earth, the Rangers talk and Bulk and Skull have a stomach ache from eating too much candy. The end.

Final Thoughts: For all the shit I gave it, watching this old episode of Power Rangers for Halloween Havok 2016 was a trip down memory lane. Yeah the show was goofy. Yeah it was dumb. But it was Power Rangers and most people wouldn't want it any other way. I'll give it 9 Pumpkin Rapper raps out of 10. Its Morphin' Time!