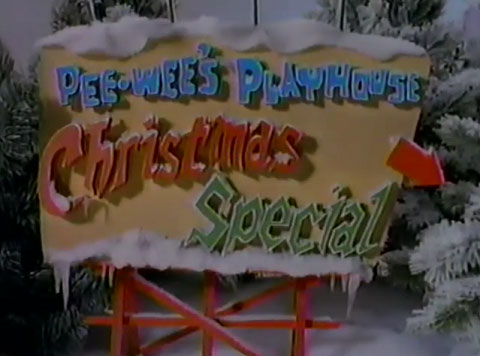 As a small child, I adored Pee-Wee Herman and Pee-Wee's Playhouse was one of my favorite shows (along with other "greats" like Camp Candy, Eureka's Castle, and The Super Mario Bros. Super Show, so I clearly had wonderful taste at a young age). As soon as you could pop a balloon, Pee-Wee was no longer seen on TV. Reruns of the Playhouse ceased, and unless you had HBO or rented it from the local mom n' pop shop, Pee-Wee's Big Adventure (and the far inferior Big Top Pee-Wee) wasn't likely to be seen on the weekend network movie blocks, either (but Jaws the Revenge was a regularly in the rotation). Years later, when the internet became something I knew of, I was surprised to find out that there was a Pee-Wee's Playhouse CHRISTMAS SPECIAL (as surprised to find out there was also a Pac-Man Animated Christmas Special, too), with a laundry list of D-Level (and a few C+) celebrities.

After a Winter-themed version of the Pee-Wee's Playhouse opening (with what I'm assuming is stop-motion capturing or Claymation), we get our first musical number that leads into a rapid fire introduction of all the guests that will be making at least a 10-second appearance (and yes, some appearances are literally 10-30 seconds long). Deep breath... Annette Funicello, Frankie Avalon, Charo, the Del Rubio Triplets, Whoopi Goldberg, Magic Johnson, Grace Jones, k.d. LAng, Little Richard, Joan Rivers, Dinah Shore, Oprah Winfrey, and Princess Zsa Zsa (Gabor). That on top of the regularly featured cast of characters, like Cowboy Curtis, Miss Yvonne, the King of Cartoons, and Reba the Mail Lady, among others.

The main story of the special is Pee-Wee's ridiculously long Christmas list, and being given fruitcake (or in some cases, multiple fruitcakes) as presents from everyone he encounters that's "generous" enough to give him a brick to bite into. Fear not, this Fruitcake Saga™ wraps up later. You know, for a season about marketing things and trying to sell crap, Fruitcake is the one thing universally buried on television as one of the most disgusting things you can get for Christmas. Personally, I've never had it, but Pee-Wee's reaction to the mere thought of eating one is enough convincing for me.

Speaking of disgusting, they somehow slipped in a line about Miss Yvonne (who years later would become relevant as Charlie's mother on It's Always Sunny in Philadelphia) practically whoring herself out for Christmas kisses. Even Pee-Wee calls attention to it. Now imagine Miss Yvonne, the character, not the actress, saying with excitement "You survived the abortion." Your childhood will forever be ruined, but your adulthood would be cool with it. 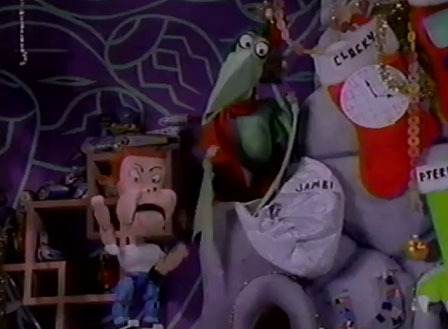 Randy the Ventriloquist Dummy tries to ruin the holidays by telling Pterri (the Pterodactyl) that Santa Claus isn't real, but quickly back peddles when Pee-Wee threatens that he won't get any gifts. Later, Magic Screen shows us the "true meaning of Christmas", which is an abbreviated version of the telling of the birth of the baby Jesus, using what I'm assuming is more public domain footage of children performing the play.

All the traditional tropes are featured on the episode, including not not limited to the Claymation of the food in the refrigerator, the Dinosaur family living in the mouse hole celebrating Chanukah, the Adventures of Penny, Pee-Wee giving the "serious voice" to teach us all a lesson about not being selfish, Jambi the Genie granting a wish (in this case, to decorate the Playhouse), a public domain cartoon that is Christmas themed (it's the one where the kooky old man makes toys for a bunch of orphans who were given crappy gifts that broke almost immediately. To knock off the comedy for a moment, it's a pretty good cartoon, and touching), and of course, the Word of the Day™.

To show that Pee-Wee is all about diversity, he welcomes his neighbor Miss Renee into the Playhouse for what they call the "Chanukah portion of the show." You see, she's Jewish, but even though they don't celebrate Christmas, they still exchange gifts for 8-days, and yes, Pee-Wee gets 8 packages of Fruitcake to further the story with his displeasure with receiving nothing but fruitcakes.

Annette Funicello and Frankie Avalon (who happened to star in Back to the Beach, an '88 film inspired by the surfer films of the 60's, with a cameo from Pee-Wee) have the largest role of all the guest stars... being Pee-Wee's slaves making homemade Christmas Cards (500 of them, by sundown!), including cutting a potato in half as a stamp, a Christmas tree stencil, and using a toothbrush to paint green glitter across it. Of course, Annette didn't remember to wash her toothbrush, and shows off some green teeth. Pee-Wee shows a bit of mercy, offering them bread and water to complete their goal. 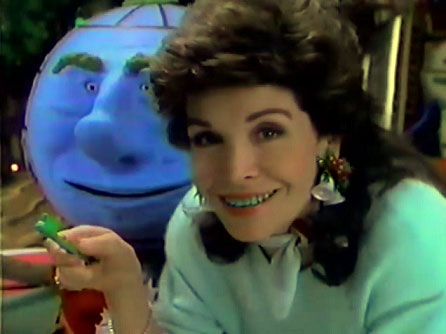 Other notable roles for the cameos...

- Whoopi Goldberg practically begging to be on the special (so this isn't the special after all?), and Pee-Wee putting her on a minimum 2-years waiting list (I'm afraid I've got some BAD NEWS).

- Reba the Mail Lady accidentally delivers a present to Pee-Wee instead of the White House, and it happens to be Grace Jones, wearing a Styrofoam cap, singing The Little Drummer Boy (arguably the greatest Christmas song of all time). 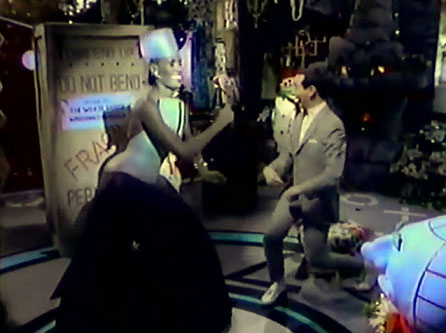 - Joan Rivers makes a cameo from the set of Hollywood Squares. Jesus, would that show ever die?! It's not entertaining, never has been, never will be. Bottom of the Barrel, "My Career is Over" Comedians making dumb jokes in the guise of answering questions dishonestly just never seemed like that good of an idea that it needed to be resurrected once every decade. It literally took me longer to type this than the run-time of Rivers' appearance.

- The Del Rubio Triplets sing Winter Wonderland. If you've watched any sitcom in the late 80's through mid 90's, you should know who they are. Three 50+ year old women who play acoustic guitars. I've seen them a few times on Married with Children, Full House, and that Mother Goose made-for-TV movie on Disney.

- Little Richard has a hard time ice skating, so Pee-Wee has a stunt double skate for him to try and show him up, with spectacular results. Yes, they actually do address the fact it was a stunt double. 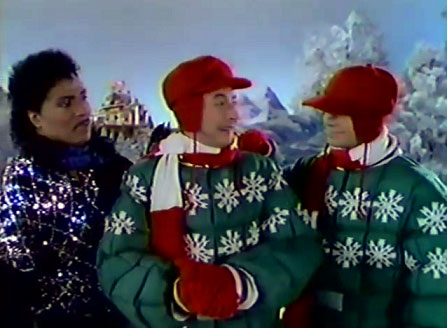 - Laurence Fishburne is NOT a special guest. He was just a nobody at the time playing a goofy character in Pee-Wee's Universe.

- Dinah Shore annoys Pee-Wee by singing the 12-Days of Christmas, and she doesn't stop at 12. Pee-Wee leaves a mannequin in his place and she never suspects anything until the very end of the special when she finally finishes the song and he doesn't reply. Oprah Winfrey actually fits her cameo in between one of Dinah's lines, making her cameo the shortest of them all.

- Zsa Zsa Gabor shows up with the Cow-ntess and adds absolutely nothing. I always assumed she was the voice of Miss Bianca in the Rescuers, but that would be Eva Gabor.

- Charo sings "Feliz Navidad" while Pee-Wee busts open a piñata. This was another "diversity" segment, but treated as considerably less important than the Chanukah part. Charo was still incoherent in the 80's as she was for her D-level revival on celebrity reality shows in the early 2000's.

Finally, the most important cameo of them all... Santa Claus, of course. He has good news and bad news for Pee-Wee and everyone else. He brought everything that Pee-Wee put on his Wish List, but unfortunately, his list was so large, there wouldn't be presents for anyone else in the world, putting Pee-Wee in the awkward situation of having to give up all his gifts for the good of everyone else (you see, we're back to the "don't be selfish" moral of the day). In exchange for giving up all his presents, Santa allows Pee-Wee to ride along with him on his deliveries. And so the Pee-Wee's Playhouse Christmas Special ends... Oh, the Fruitcakes. I forgot. Pee-Wee used them as bricks to build a new wing to the Playhouse. I hope you didn't expect anything more than that, I'm just surprised they tied it all together for some kind of blow-off at all. 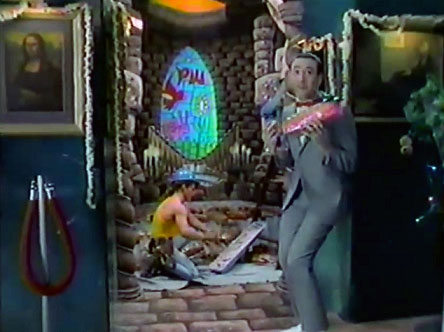 Final Thoughts: For a 46-minute special (obviously excluding commercials), this feels much shorter with everything happening in such rapid succession that you barely have time to digest what you've taken in before we move onto to the next Playhouse segment, cameo appearance, and/or Christmas song to be sung. The list of celebrities is most of the usual cast of "will do anything for a check" performers (Little Richard, Del Rubio Triplets, Joan Rivers), but the cameos of Grace Jones, k.d. Lang, and Charo gave us a few decent musical segments that spruced up tired old Christmas songs. The DVD I have includes several audio commentary tracks, including Paul Reubens, but I won't bother using those as part of my overall enjoyment for the special. If you've never seen it and have a soft spot for childish (and I mean that literally) humor, this is one of the best Specials that nobody watches.