The Muppet Show with Vincent Price

The 5th Annual DWS Halloween Havok continues with another episode of The Muppet Show. Last year, we covered the episode featuring Alice Cooper, who tried to turn Miss Piggy into a hideous monster, and declared himself a disciple of the devil, looking to collect souls. With only one other episode from the Muppets featuring a spooky theme, here we go with our very special guest star, Mr. Vincent Price.

Kermit welcomes us to what will no doubt be a "very unusual" episode of the Muppet Show, to accommodate the arrival of tonight's guest star, Vincent Price. With that in mind, there will be no slapstick, no silliness, and no craziness... so naturally Fozzie casually walks on stage and slaps Kermit in the face with a whipped-cream pie. Oh well. We throw it to the opening act, a creepy Muppet named Behemoth sings "Under My Skin", while making every attempt in the world to eat a much smaller, more pathetic Muppet named SHAKEY SANCHEZ. Now there's a gimmick name ripe for the picking in the world of professional Wrestling. Honest question... when is Muppet on Muppet cannibalism NOT entertaining?! After struggling for several minutes, Shakey finally relents and closes by singing "Que Sera, Sera" while trapped inside the belly of the monster. 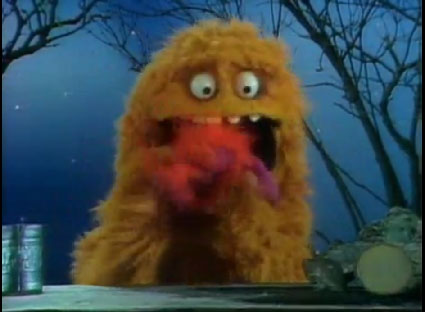 Backstage, we see Shakey Sanchez shaking off the traumatic effects of being eaten by a much bigger Muppet. Scooter informs Kermit of something wanting to audition. "Who is he?" "It's not a really a he." "Who is She?" "It's not exactly a she." "This severely limits the possibilities." It turns out to be a Three-Headed Monster that just can't seem to make up their collective minds on anything. More on them later...

We are sent to the House of Horror in Transylvania. Gonzo and Fozzie have rented a cottage and it turns out to be a haunted house. That's what happens when you answer the want-adds in Wampire Veekly. Soon arriving is none other than Vincent Price and his beautiful assistant (Uncle Deadly) and a hideously deformed monster. Things quickly go wrong as midnight approaches. Every night at the stroke of Midnight, the master turns into a screaming, demonic, maniacal, raging blood-lusting animal. "And then I get mean", chimes in Price. It also happens to be New Years Eve, so the Master turns into Jack Parnell. Statler and Waldorf compare Price's creepiness to one Thudge McGerk, their previous holder of the "Creepiest Actor" award. He's a three-eyed, fanged monster who pops up and scares Statler out of his chair, falling from such a crippling height, he should've broken every bone in his Muppet body. I have a Muppets Show book that actually illustrated this whole scene, and yes, I do read the line "and then I get mean" as if it were spoken by Vincent Price. 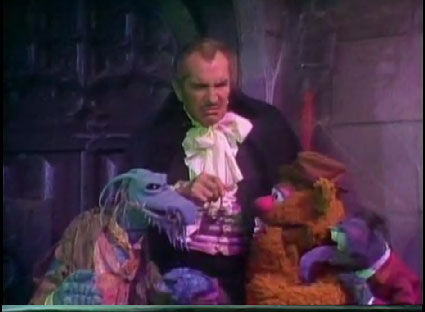 The Three-Headed Monster, "Tom, Dick, and Harry", are still chomping at the bit to audition. They sing... or dance... or tell jokes. They can't seem to make up their minds. They always work on television... sometimes... never. Sam The Eagle is on stage to throw it to the natural, normal, Wayne and Wanda. They attempt to sing "Bewitched, Bothered, and Bewildered". After about 17-seconds, Wanda turns into Blue Frackle, and their sketch is over. I wonder what the longest time is without interruption for one of their performances...

It's time for a Panel Discussion, hosted by Kermit the Frog. Thankfully his guests aren't Ray Romano, Harold Ramis, and Al Michaels. His guests for the week are Vincent Price, Pierre LaCousse, a great French-Chef, and Gorgon Heap, a great eater. The topic of the Panel: Gourmet Dining. Gorgon Heap casually eats everything in sight, including Chief LaCousse. That brings our Muppet on Muppet Cannibalism total to TWO, and we're not even half-way through the show. Gorgon goes after Kermit, and Vincent Price joins in seasoning Kermit while declaring his love for Frog's Legs. We see Kermit escaped and somehow found himself in Statler in Waldorf's balcony, so no points to the Cannibalism Counter. 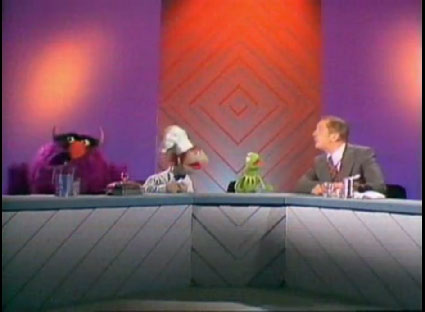 At The Dance is next, and it's not the usual collection of dancers. Are dance partners for the night include two spirits, a Vampire munching on the neck of his date, a creepy Blue Geek dancing with bats, and finally the previously seen Blue Frackle, sporting a blonde wig and fake female voice, giving away her head to her dance partner. Backstage, a collection of Spirits are swarming around, singing "I'm Looking Through You." Apparently this was only seen on the UK cut of the Show. It's not a bad sketch and ends with Fozzie trying to shoo them away.

Kermit has a sit-down interview with Vincent Price. He asks him how does he turn himself into a Vampire in all of his movies, so Price sports a set of fangs. He gives a long-winded speech about it until Kermit shows off a set of fangs himself and ends the sketch by biting Vincent Price! Well, that escalated rather quickly. Tom, Dick and Harry continue to bother Kermit about being on the show, but he won't let them on, even after hearing their idea for a song: Tea for Three. 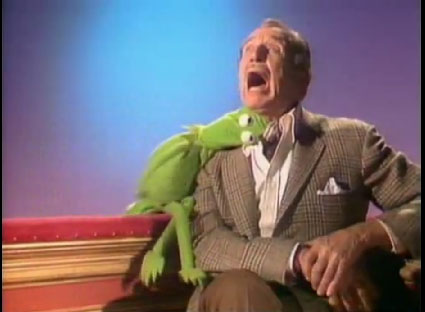 MUPPET NEWS FLASH! Reports are that furniture has been turning into monsters! At least 7 people have been eaten by their furniture. According to "David Goelz", there's no way for furniture to turn into a Monster. We cut to inside a poor Muppets apartment where all his furniture is trying toe at him. Afte thinking everything is calm and safe, the Television comes to life and eats him, making it our THIRD Muppet Cannibalism. Then the News Reporter gets eaten by his deck, making it our FOURTH! PAD THE NUMBERS! PAD THE NUMBERS!

Vincent Price is looking for assistance with his costume. Sweetums wanders on, offers to give Vincent Price a hand, and if you don't know the punch-line to that joke, you have no business reading about literal comedy set-ups. Fozzie comes across Tom, Dick, and Harry, and they've settled on their act, should they ever be allowed to perform: One will tell jokes, the other will be the straight-man, and the third will be the audience. After a Talking Houses segment (which has nothing to do with anything spooky or creepy), it's time for... 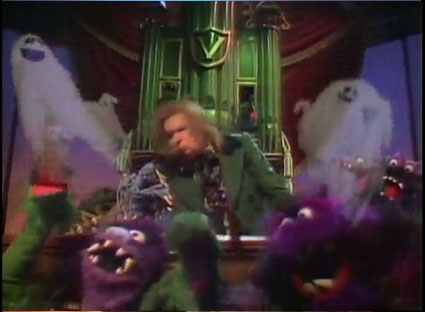 The Closing Number. Vincent Price, dressed kind of rough-looking with a shaggy wig, is singing "You've Got a Friend", with the obvious creepy remix style of singing. Uncle Deadly soon joins in to make it a duet, and then a whole gaggle of Monster-type Muppets, including the floating Spirits, Frackles, Heeps, and other unrecognizable characters, join in for the finale. I love when a guest looks to be having the time of his life, and Vincent Price sure did look like he was having a ball with all the whacked out stuff he got to be a part of. We end with Kermit asking for the audience to give Vincent Price a hand, only for Vincent to offer his instead... come on, you know what happens, we just teased the same outcome between himself and Sweetums!

Final Thoughts: A fun episode from beginning to end. None of the sketches or musical performances were the greatest songs, but the opening with one Monster eating a smaller, helpless Muppet, is memorable, and the closing number with all the spooky muppets and monsters was something to behold. As far as guest stars go, Vincent Price was great in every segment, going along with all the goofy, campy stuff the Muppets were known for. From the sketch in "Transylvania" and his beautiful assistant Uncle Deadly, to the Gourmet Dining discussion, and even letting Kermit turn into a Vampire Frog and being bit by him, all of his segments were entertaining. Unfortunately, the official DVD release of Season 1 butchers this episode quite a bit, so look online for the full show if you're interested.