The Muppet Show with Alice Cooper

- Halloween Havok has come and gone for the 4th time, and what better way to close it out with a random non-wrestling related column loosely tied into the Halloween season? My original intent was to have this done mid-way through October, but once I settled into the subject I wanted to focus my attention on, it left me in a state of depression. I love the Muppet Show, and the Muppets in general, but that love has been forced into the back of my mind because of personal reasons. Moments and memories I once cherished are brought back to me, almost in haunting fashion, through material related to the Muppets. Sorry to open things in such a downer style, but I figured it was worth explaining in case I run off the tracks later on.

Although the Muppets never technically did a Halloween themed episode, they've had several guest stars that were very much in touch with the motif. I don't think I could've chosen a better episode than the one with Alice Cooper to really get a taste of the season. For youngsters out there, or those just unfamiliar in general, Alice Cooper made a name for himself through combining music with a strong foundation of on-stage theatrics. I'm not going to try and say I'm a big fan, but he does have a long list of songs I particularly care for, and hey, who doesn't love the song from Alice Cooper used on the Friday the 13th Part VI Soundtrack? Yeah, that was awesome. Anyway... yeah, ALICE COOPER, Shock Rocker who was most definitely intended for older audiences, is tonight's guest on the Muppet Show.

The show opens, as has become the tradition, with Scooter knocking and entering the dressing room of the guest of the evening. Surrounding Cooper is a bunch of freakish Muppets, who Scooter notes aren't any of the Muppets that work for them. No fears says Alice Cooper... he brought them himself. 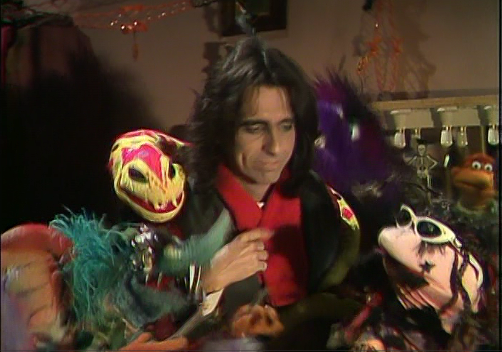 The first act of the night involves our special guest, performing "Welcome To My Nightmare", dressed like Dracula and emerging from a coffin. There's no Electric Mayhem playing for him, but an ensemble of some of his Monster Muppets from the opening. Following the performance, Cooper informs Kermit that he is in the services of a friend that deals in making wishes happen (a subtle reference to the Devil), and negotiates the selling of souls. Remember, this was back when children weren't smothered by over-protective censorship and ratings. While this is going on, the act on stage with (a very nervous) William Tell doesn't go so well, first with an arrow piercing through the contract Cooper offers to Kermit, and then his assistant shows up skewered, as well.

Following a typical segment of Muppet Labs, with Beeker attacked by an over-sized germ, and Gonzo contemplating signing the contract presented by Alice Cooper (you can't find a pen when you need one), it's back to the weird and creepy, this time with a Monster's disgusting, jagged TEETH reciting everything (sometimes accurately, sometimes comically not) the main tooth is saying to describe his displeasure. Then in an odd twist, the tooth apparently was part of a set of teeth inside of ANOTHER tooth, and the joke continues with this set of teeth repeating the bit.

Backstage, Alice Cooper is getting ready for another sketch when Sam the Eagle interrupts, telling him that he is, and I quote, a "demented, sick, degenerate, barbaric, freako." Cooper responds correctly by thanking Sam for the compliment. Sam: Freakos 1, Civilzation 0. Cooper chalks it up on the imaginary board to hammer home the hammy-goodness. Back in the Theater Cafeteria, Fozzie (the Bear) decides to hang out away from all the weirdness with all the "clean cut kids", who actually turn out to be freakos, too. Poor Fozzie can't catch a break. Fozzie: Why can't we have one nice thing on the show tonight?"

And with that, with segue to Robin the Tadpole singing "Somewhere Over The Rainbow." It seems like whenever they needed to get over a powerfully emotional song, Robin was trotted out there to hit a home run. It's a simple set-up and a simple song performed beautifully, and shows once again that it doesn't matter if it's coming out of a Muppet, music is a powerful tool to manipulate feelings deep inside someone. To think, this isn't even the most tear-inducing song ever sung by Robin on the Muppet Show (and don't even think about watching the Tribute to Jim Henson, unless you have a box of Kleenex handy). 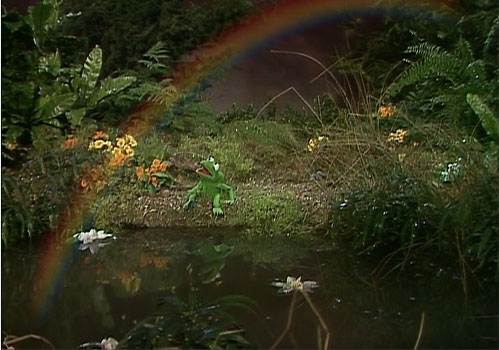 The show returns to "normal", with Kermit freaking out over a candlestick moving on it's own. In a spot specifically filmed for non-American audiences, a gaggle of Monster Muppets sing "Once a Year Day", a song devoted to having at least one day a year to be whatever they want to be. It even allows that big goofy blue Muppet a chance to take part in the segment. You know, the one from the opening song that dances along with Sweetums and the other walking Muppets. I can see why that spot was cut out for the American audiences... it was definitely filler.

Alice Cooper returns for his second musical performance of the evening, a surprisingly good ballad called "You and Me" (and not Dupree) with another freak Muppet. It's another song and sketch I had avoided for personal reasons, but taking that out of the equation, it's still a very touching song. The freak Muppet turns out to be Piggy, who refuses to sell her soul to Cooper and his "boss" after being unsatisfied by the appearance he gave her. Turns out he doesn't make commission on hourly rentals, either.

Next up is Pigs in Space. I never cared much for these segments. This time around, Link Hogthrob appears to be suffering from some kind of debilitating ailment. Treatment from Dr. Strangepork and 1st Mate Piggy renders him an outline, giving us the highlight joke of the sketch: "I'm a shell of my former 'self." Apparently whatever Link has is contagious, as it soon turns Piggy and Dr. Strangepork into outlines, as well. And that's how it ends. OK?

The closing number this week brings out our special guest for one last song, "School's Out", performed alongside a bunch of the over-sized Monster looking Muppets. Cooper first performs the sketch dressed like a demonic Graduate (he still barely qualifies as more masculine than Lanny Poffo in the same outfit), and then shows off his string-bean body in a spandex outfit fashioned with a Devil tail on it. The real highlight of the sketch is that the lyrics are interpreted quite literally, with the whole thing ending with a school blowing up and being rained upon by destroyed books. The show comes to an end with the biggest fright of all... the electric bill from the special effects department! Final Thoughts: I think it's a very easy conclusion to come to that the best episodes of the Muppet Show usually featured heavy involvement from a Musical Performer, and of course, Musical Performers who have a knack for theatrics. I don't think any other guest would fit that role better than Alice Cooper. I'm not going to lie and I'm sure I've already mentioned this, but his song selection isn't my favorite for an episode of the Muppets, but the effort in putting together the performance with the music makes up for it. Also, with the exception of Robin, most of the main Muppets (Kermit, Gonzo, Fozzie) were featured in off-stage bumpers, and Piggy was only seen for Pigs in Space (the singing voice of her Freak Appearance was a different singer). Considering it's Season 3 and the characters have been defined in their roles, it's pretty cool to see them put aside the normal and use the lesser used Muppets who, without the horror theme, probably would never have been used in prominent roles. Easily one of the Top 5 episodes of the Muppet Show, alongside episodes featuring Elton John and Harry Belafonte, to name a couple.