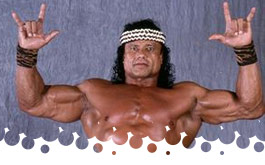 WWF Championship Wrestling – February 2nd, 1985 - Taped from the Mid-Hudson Civic Center in Poughkeepsie, NY on January 22nd, 1985, the first batch of a new set of tapings. Vince McMahon and Bruno Sammartino are on hand to call all the action. This week, we'll look at "Mr. Wonderful" Paul Orndorff, newcomer "The Anvil" Jim Neidhart, the one and only "Superfly" Jimmy Snuka will be here, as well as the Magnificent Muraco. Andre The Giant will be a guest on Piper's Pit.

The Junkyard Dog vs. Johnny Rodz

It's a battle of WWE Hall of Famers! Scheduled for a 10-minute time limit, but hopefully it won't go that long. Rodz's nickname is "The Unpredictable", but he predictably never wins matches, am I right? As usual for the time, JYD comes out to Queen's "Another One Bites the Dust." Rodz plays it smart, hiding out on the apron. The Dog has enough of it quickly, bringing him in with a slingshot. JYD gets on all fours and Rodz bails, again. Rodz rakes the eyes not once, not twice, but thrice. JYD comes right back, taking Rodz over with a snap mare, and knocking him out of the ring with his signature headbutts. Rodz hooks the rights to take the JYD down and chokes away. You can't keep a good Dog down, as he rallies with a mouthful of stomach. JYD gives Rodz a rake of the eyes and finishes with the Thump (Powerslam) at 3:06. Keeping it short and to the point with the JYD is the only way to go.

- Lord Alfred Hayes is standing by with a Special Update. We're STILL talking about what took place at Madison Square Garden nearly 6-weeks ago. We throw it to footage of Gene Okerlund in the locker room of Madison Square Garden, where Cyndi Lauper's manager, David Wolfe, is selling a beating, possibly at the hands of Roddy Piper. Details are sketchy, despite so many weeks removed from the incident! We'll be informed more on the matter, next week.

I always forget that Orndorff was associated with Heenan, especially since we're less than two months away from the first WrestleMania, and their relationship was never addressed on that show. Pompell is pronounced "Pom-Pay" by The Fink, for what it's worth. A little girl has a crude puppet of Heenan that McMahon laughs at for being a poor likeness of the Brain. Crowd taunts Orndorff with chants of "Paula", then Heenan with "Weasel." Heenan looks under the ring and pulls out a stretcher. Lockup and Orndorff puts the boots to Pompell. Whip to the ropes and a running knee lift. Whip to the ropes and Orndorff with a clothesline. Piledriver finishes at 1:44. Orndorff's piledriver is easily one of the best you'll ever see.

- "Mean" Gene Okerlund is here to hype tonight's card at the Boston Garden, featuring a Texas Tornado Tag with Andre the Giant and the Junkyard Dog taking on Ken Patera and Big John Studd. Andre and the Dog are here to promise bad things for the Heenan Family.

- We have BREAKING NEWS, via video tape footage...

- "Mean" Gene Okerlund continues to hype the Boston Garden card tonight (February 2nd), running down some of the card. The Magnificent Muraco and Mr. Fuji are here for comments. Okerlund says the Boston Garden is a jinxed building for Muraco. Muraco is disappointed being low on the show against George Wells when he's used to being in the Main Events.

One of Muraco's first matches since returning to the WWF. We saw in the vignettes leading up to this that he was positioned for a spot with Hulk Hogan but will likely sit on the backburner for a bit as we approach a more important date with an opponent the fans want to be seen torn apart. Muraco starts off with a slam and knee drop, followed by a gut-wrench suplex. He takes Marino down with a sloppy Russian leg sweep and drops a headbutt across the "lower abdomen." Muraco traps his opponent in the tree of woe and puts the boots to him. He gets a near fall from a side headlock takeover. Whip to the ropes and Muraco with a dropkick, and the Spike Piledriver (Tombstone) finishes at 2:43.

Andre tosses a chair aside as soon as he enters the picture. Piper says he's been a fan of him a long time and says his bodyguard, Ace, has been a fan, too. Andre says next time he's on Piper's Pit, to get him a chair that fits. He promises to get even with Big John Studd "my way." Andre corrects Piper calling him sir, insisting to be called "Mr. Giant", and walks away from a handshake. As soon as he's out of the picture, Piper calls him an idiot and a jerk. Piper says John Studd is bigger than Andre the Giant. The bigger they are, the tinier the brain. Classic Piper, kissing up to Andre when face-to-face, then turning 10-feet tall as soon as he's left the stage.

TV Debut for Jim Neidhart. I'm sure not many people remember him part of Fuji's stable when he arrived in the WWF. Neidhart last made stops in Continental and Championship Wrestling from Florida before this. Neidhart attacks Rivera from behind. He plants Rivera with a slam and drops a forearm across the chest. Whip to the ropes and Neidhart connects with a dropkick. He tosses Rivera out of the ring, but no cheap-shot from Fuji. I guess that was a standard spot a few years later. Neidhart with another slam and forearm drop for two. Whip to the ropes, Rivera ducks a right hand and connects with a dropkick. He has a short rally, but meets a boot in the corner, and Neidhart finishes with the Powerslam at 3:05. Someone let Anvil know that JYD already uses that move. I don't see much upside to solo run Neidhart, seems like a card-filling guy rather than someone we'll see get a significant push.

Snuka gets one of the better pops of the hour. If not for personal demons, I wonder how far he could've gone in the early days of the National Expansion with his popularity and obviously having McMahon's support. Craney goes after the arm, working a wrist-lock. Snuka counters but gives a clean break in the ropes. Snuka rolls through on a school boy and backs Craney into the corner, again giving him a clean break. Whip to the ropes and Craney over-sells a chop. Snuka connects with a back breaker and finishes with his signature flying splash at 3:25. Always weird to watch Snuka give the enhancement guys a little offense before finishing them with a couple of moves.

- Gene Okerlund standing by for one final time to hype tonight's (February 2nd) card at the Boston Garden (no, NESN didn't broadcast these shows until May '85, so no recap of that show). Paul Orndorff and Bobby Heenan come into the picture to hype their match with Ivan Putski. Heenan compares Orndorff to Bobby Orr and Larry Bird, and says that Boston wants to rename their arena "The Mr. Wonderful Garden." Big John Studd and Ken Patera come in next, still with a bag of Andre's hair in hand, hyping the Texas Tornado Tag.

- Vince McMahon once again promises to show footage from Madison Square Garden, as well as another secret training session with Hulk Hogan and Hillbilly Jim. Next week, Big John Studd and Ken Patera, Tito Santana, Blackjack Mulligan, and Greg Valentine will be here next week.

Final Thoughts: The big news coming out of this episode is Mike Rotundo and Barry Windham winning the Tag Team Titles from Dick Murdoch and Adrian Adonis and magically being guided to victory by an invisible Captain Lou Albano. The roster continues to build depth, with the debut of Jim Neidhart. Paul Orndorff and the Magnificent Muraco appear to be groomed for bigger things, but at the moment, the top heels are Studd and Patera, feuding with Andre, and Roddy Piper, who mysteriously attacked someone allegedly at MSG, and WE STILL HAVEN'T SEEN THE F*CKING FOOTAGE!