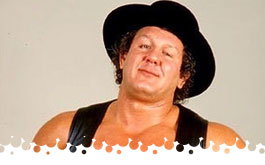 Hosted by "Mean" Gene Okerlund, along with co-host Lord Alfred Hayes. Tonight's guests include "Leaping" Lanny Poffo, Cowboy Bob Orton, Bobby "The Brain" Heenan and George "The Animal" Steele. You know what I won't miss about recapping TNT when the show wraps in September?

I'm curious why Lou Albano has been absent more than usual lately. I'm sure he got fired 2-3 times that day, but they still sobered him enough (HA) to appear on the show anyway. Okerlund notes this is only the second time Steele has been on the program without Albano by his side, per the instructions of Albano, according to Okerlund. Steele sits there like a goof in the face of a question, so we throw it to footage of Steele in action.

Recycled from the April 12th episode of Championship Wrestling. Rizzo tries to attack from behind, but that has no effect. Steele tears apart one of the turnbuckles and gives Rizzo a taste of the stuffing. Steele rips open a second turnbuckle and takes Rizzo over with a sloppy crucifix cradle for three at 2:40. Steele goes back to the turnbuckle, which seems to have been the focus for his attacks all match. It wasn't so nice for me to watch it twice.

Back in the studio, Okerlund says Steele has come a long way "personally" thanks to Albano. Alfred says Albano has dedicated a lot of his time to helping Steele along with his therapy. What about Elizabeth? "NICE! MACHO MAN BAD!" Alfred thinks Elizabeth has been using George. Thanks to Lou Albano, he's arranged to take Steele to a special set in the studio. We walk LITERALLY FOUR FEET to a couch positioned to the side of the stage. We come back from commercial as this segment limps along. We've got a SPECIAL THERAPIST to look at George named "Suzette Lace." Somehow, I doubt that's her real name. She's going to try and bring George out of his depression over Elizabeth. Who booked George Steele, ON HIS OWN, to be on TNT for 15-minutes? Ms. Lace rubs George's knee as Okerlund tries to spin this as some sexually provocative behavior. She removes her jacket, revealing a strapless dress. "NICE!" Where's Cancel Culture now? Not because I dislike her body (meh), but because this segment sucks. Steele immediately storms off the set, screaming for Elizabeth. Okerlund continues to be a creeper as we wrap up this dumpster fire.

THANK GOD. Heenan comes out with lipstick on his cheek. THAT'S GOTTA BE SUZETTE LACE! He knew George Steele is an idiot, but to sit out here and show no reaction, his face should be on a box of saltpeter. Heenan says he talked to her backstage "I can see you've talked to her!" Heenan says he doesn't bring up Okerlund sneaking around at 3 in the morning and credits her work for being a great therapist. Okerlund talks about a recent tour of Australia and we get footage of them on location. Okerlund is with Ricky Steamboat, feeding a kangaroo. Paul Roma and S.D. Jones show up from the deepest part of nature, and whatever they did is fine with me as long as they don't push it on me.

We return to the studio, with Heenan laughing his butt off at the footage, making fun of the Superstars for being a bunch of dumb tourists. He says Steele might've had a good time with a Koala Bear on the couch. As for Roma, he's walking around with a camera, maybe next time he'll remember to put film in it. Heenan says he's wearing black to mourn Albano's loss... Heenan's gain of Albano's therapist. Okerlund calls Heenan the shortest manager besides Jimmy Hart, and for some reason, I don't think he's talking about height. To recap, the first half of the show has been objectifying what I guess was a good-time girl.

He comes out tossing frisbees into the audience. I guess I should use the generic name because that's a brand name, but "flying discs" doesn't feel as special as a FRISBEE. Okerlund credits Poffo on his ability to hit the lights. Poffo credits his success to a course in Hulkamania 101. He's been training, taking his vitamins, and "hanging and banging." He's upset for Steele and has a poem dedicated to him. With that unpleasantness out of the way, let's look at Poffo in action...

We're joined in progress from the May 19th card held at Madison Square Garden. You know you're in prelim hell when the most recent footage of MSG is used to showcase your abilities on TNT. Lee works Poffo over with chops, knocking him over the top rope in the process. Lanny, you don't need to justify your spot on the card, everyone knew it was nepotism. Tiger lights him up with more chops and puts a foot across the throat. Poffo fights back with right hands and flips Lee upside down on a whip into the corner. Whip to the ropes and a BAAAACK body-drop for two. Poffo keeps throwing rights but Lee pokes him in the eye to cut him off. Poffo takes another bump to the floor, this time going through the ropes. Lee brings him back in with a slam. Poffo recovers quickly, slamming Lee off the top rope, but misses a slingshot senton. Whip is reversed and Poffo finishes with a hurricanrana at 3:16 (shown).

Back in the studio, Okerlund calls it a difficult task to get one over on Tiger Chung Lee. Poffo has a new poem, calling TNT the highest rated show on the USA Network and the best entertainment on a Wednesday night. Remember when the show was TUESDAY Night Titans? Then moved to Friday. Pepperidge Farm remembers. Pepperidge Farm also remembers what the ratings were really like and why there was a change in hosting duties.

Orton feels naked not slumming around with Roddy Piper, who's been MIA since WrestleMania 2. Orton congratulates Gene on taking over as host, because Vince clearly ran out of ideas, so here's the best man to replace him.

Joined in Progress with Orton in control of a side headlock. I wouldn't be surprised if this were several months old, at least. He sends Gee to the turnbuckle and clubs him across the back of the neck with a forearm. Orton with a slam and forearm across the chest. Whip is reversed and Gee throws some crummy right hands. Whip across the ring and Orton brings up the boot. He comes off the top rope with a fist drop. Gee tries another comeback, but Orton quickly cuts him off, blocking a dropkick and hitting a running dropkick of his own. He straddles Gee across the turnbuckle and finishes with the super-plex at 2:51 (shown).

Back in the studio, Orton calls himself one of the best wrestlers in the world and mocks the audience for not appreciating that. Okerlund grabs a microphone and takes Orton for a short walk where they have a pool table. Orton says it's not regulation size, and sure enough, it does look small. Orton calls it a barroom table "why, do you have to put the quarters in?!" We come back from commercial, and I guess we're so out of ideas, we're playing billiards. Okerlund asks for a volunteer from the audience to play. $20 says he's a ringer. Larry chalks up as Orton complains he wouldn't have done such a good break had he known he'd be playing someone else. Okerlund hurries Larry along and sure enough, he's sinking balls with ease. Orton accuses Okerlund of hornswoggling him (my words, not his). Orton has nothing but excuses, complaining Gene set him up like a geek. Orton says he's a good sport and surprisingly doesn't whack Larry with something, with one fan on Orton's side as Okerlund eggs him on. BOO!

We return from one last commercial break and little time left, so we bring Suzette Lace back out for Okerlund to be a complete pervert. There's ZERO effort to hide the innuendo when it comes to getting George Steele to come out of his shell.

Final Thoughts: Gene Okerlund brings the perverted side of the wrestling business to the center stage in the dying days of TNT. Most of the episode was dedicated to the innuendo that Captain Lou hired a good time girl for George Steele. Lanny Poffo was his usual self as a filler guest, and Bob Orton definitely should've beat the crap out of someone, but he played it straight to my disappointment.