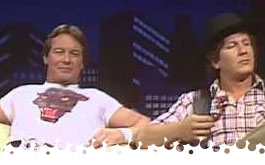 - Andre the Giant joins McMahon and Alfred in the studio, and I'm expecting this a lengthy visit considering the importance of Andre's role in the company. McMahon calls Andre the most "phenomenal and most recognized athlete in the world." Andre says he's almost at 500 pounds when Vince asks him if he's gotten bigger since he was last on TNT. Andre says when he first met Hayes at 17 years old, he was 270 pounds (and Hayes said Andre could throw a devastating dropkick, too).

- Highlights of Andre the Giant vs. Ken Patera from the January 21st, 1985 card held at Madison Square Garden. The full match is highly entertaining, thanks to Andre completely squashing Patera before Heenan got his man Disqualified.

- Back in the studio, Vince says there's a lot at stake on March 31st. He calls it the FINAL CHAPTER where Andre either must bow in defeat to Big John Studd, with $15,000 on the line if he can slam Studd. Is Andre willing to put anything up? Andre says they already took his hair, but he doesn't go to the ring to be a loser, he's going to Madison Square Garden to win. Vince asks him again if there's anything he can put up and brings up Heenan's suggestion that Andre must retire from wrestling if he cannot slam John Studd. He still insists something shouldn't be put up on his behalf, but Vince goads him that people will call him yellow. Andre angrily grabs McMahon by the tie and tells him he's going to take Studd's $15,000 and walk away the winner before storming off the set. During the commercial, Lord Alfred got the scoop from Andre that HE WILL PUT HIS CAREER ON THE LINE.

- Greg Valentine (the reigning Intercontinental Champion) and Jimmy Hart are out next, all smiles. McMahon has the camera man get a look at Hart's footwear. Valentine says he acquired Hart from Memphis, TN and again mentions his background in rock ‘n' roll music, REAL rock ‘n' roll, not the crap Cyndi Lauper does. He says Albano is nothing but a slob and brought him down, and that's why he's got someone like Hart to make sure he doesn't get the short end of the stick.

Recycled from the February 9th episode of Championship Wrestling. At least it's from 1985, but still outdated since we don't have Jimmy Hart at ringside. The crowd gets on Valentine with a loud "Tito" chant. Lockup and Valentine goes for the arm, but Powers counters with a wrist-lock. Valentine escapes and picks the leg, but Powers escapes before anything can come of it. Valentine grabs the ankle and Powers nails him with an enzuigiri. Valentine counters a side headlock with an atomic drop to the knee. He takes Powers to the canvas and drives a series of knees into the left leg. Valentine with a suplex, forearm across the back, and the Figure-Four finishes at 2:38.

- McMahon asks Hart for a predication in Valentine's defense against the Junkyard Dog at WrestleMania. Hart says JYD is an outstanding athlete, but he's gonna' bite the dust. Valentine says he wants to find out how bad the Dog is and dares him to headbutt him. He's ready and we'll find out why he's the reigning Champion for 6-months. Valentine says WrestleMania won't be the complete card without himself and Jimmy Hart. Hart says Valentine was ballooned to 265 pounds hanging around Albano, but he's trimmed him down to 250 and says he's in peak condition.

- Everyone's favorite trio, Roddy Piper, Paul Orndorff, and Bob Orton are in the studio next, but first we get to see the trio on the set of Piper's Pit running down Hogan and Mr. T in a segment we've seen before on All-American Wrestling a couple of weeks ago. Only Piper accepts Vince's handshake, but Orndorff makes sure to wipe Piper's hand on the shirt afterwards. McMahon questions Orton's wrist still being in a cast. Piper says because of Snuka he'll still have the cast on for March 31st. Piper says he loves how they come up from doing sit-ups giving each other kisses. Piper claims they're the most popular stars in the world and is over-confident about what'll happen at WrestleMania.

- AHA! The graphic reads "Coming up next... The U. S. Express!" FINALLY! Something to suggest the name "U.S. Express" did exist... but they are simply introduced to the "studio" as just Windham and Rotundo. McMahon says their toughest match of their careers will be against the Iron Sheik and Nikolai Volkoff. Rotundo cuts a VERY DRY babyface promo about the challenge they're about to face at WrestleMania.

- Highlights of Rotundo and Windham in action against Rusty Brooks and Terry Gibbs from the March 16th episode of Championship Wrestling.

- Back in the studio, McMahon again stresses over a million people will be watching on closed-circuit television. He asks if that kind of viewership will be pressure on them. Windham says it's an impressive number of people watching, but they've been training hard and ready for the occasion. Rotundo says it's like being in your hometown, and it just drives you to push harder.

- Vince McMahon throws it to the latest footage of Hulk Hogan and Mr. T preparing for WrestleMania on March 31st. This time it's about nutritional training, as Hogan and T are on location at a health-food store somewhere in Venice Beach, CA. Mr. T talks about getting some vitamins, raisins and nuts. He tells Hogan to get the good stuff, otherwise he'll make him put it back. T demands a double and triple double juice ("uh... uh... what is this here?! CARROT JUICE!"). Hogan says no milk in his protein shake, that's for babies. T wants some wheatgrass and wheat-bread. AND A COUPLE OF BANANAS. Hogan says he didn't know eating bananas was part of guerilla warfare. T says it is... GORILLA WARFARE. OH MY GOD, WHAT ARE THESE GUYS ON.

- The Great Wrestling Trivia Contest continues, and here we have the 3rd and final question to a contest that holds a grand prize of tickets at Madison Square Garden (but not at WrestleMania) and $500 in spending money on a 3-day, 2-night trip to New York City. McMahon pretends to fall asleep as Hayes runs down the rules. Here is the FINAL QUESTION: "What famous star presented an award to Capt. Lou Albano at a recent Madison Square Garden event"? I think I know the answer to #1 (Dick Murdoch sampled a hot dog on a tour of New York, but I don't know if that was featured on TNT), but #2 is a blank (see last week's TNT for that Question"), and #3 is Cyndi Lauper.

Final Thoughts: In a bit of a surprise, we got the announcement on Tuesday Night Titans of all places that Andre the Giant agrees to put his career on the line as collateral against Studd's $15,000. Other than that, it's more hype for WrestleMania and recycled content from the syndicated shows. Other than Windham and Rotundo (which wasn't as bad as some guests we've seen), everyone else did a good job in the studio.