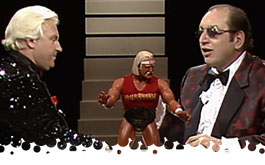 Hello again, everybody, it's time for Prime Time Wrestling with Gorilla Monsoon and your host, Bobby "the Brain" Heenan. We have a special feature this week, as we'll get a verbal response to "Mr. Wonderful" Paul Orndorff from WWF Champion Hulk Hogan. Brains keeps interrupting and plugging the segment. In fact, he's dressed in black, this week, to "mourn the death of Hulkamania". Gorilla says that is "highly unlikely". But with so much going on in the World Wrestling Federation, let's get down to ringisde for..

A Special Look at the Rougeau Brothers

From Saint-Sulpice, along the St. Lawrence Seaway in Quebec, we get a pre-recorded video of the Rougaus riding motorcycles (without helmets), then riding in a boat and water-skiiing (without shirts). Gorilla: "Talk about living dangerously"!

A syndicated show leftover, again, with Gorilla and Lord Alfred Hayes on the call. Rougeaus tag in-and-out, working on Thornton, then do a double-team straddle splash on his leg. More leg-work, until Jacques misses an elbowdrop and eats some uppercuts. Gibbs whips Jacques to the ropes for a reverse elbow, and it looks like the Rougeaus may have missed a "blind tag" spot. Standing front face-lock from Thornton brings the crowd to amazement. Biggs and Thornton do an awkward, whip, drop-down and kneelift sequence on Jacques. Double clothesline as Jacques keeps getting pummelled. Raymond breaks up the double-team as all four men brawl in the ring. Rougeaus do the double Irish whip reversal, as Gibbs and Thronton collide. Drop-kick from Raymond sends Thronton packing, then Jacques with a nice top-rope drop-kick on Gibbs to get the pin. An etended showcase for the Rougeaus.

Joined-in-progress from Madison Square Garden, with Garea working an armbar. Gorilla and Lord Al on the call, again. JJ takes over with a charging clothesline, then some very basic thumping. Garea fights out on the chinlock and gets a sunset flip for 2. Must be early in the card, because the crowd seems to dig this mini-comeback. We celebrate with more chinlock action. A little criss-cross action sees Garea avoid a powerslam, then roll-up JJ off the ropes for 2. Another celebration of the application of the chinlock, courtesy of JJ. One of Jimmy Hart's megaphone rambles: "this is the future of professional rasslin', baby-- Jimmy Jack Funk"! JJ tries a vertical suplex, which Garea reverses. Hip-toss and drop-kick from Garea, then he wheelbarrows JJ out from the corner. Another criss-cross sequence and this time JJ picks Garea up for what appears to be a bearhug... then turns it into a powerslam to get the pin. Huh. Jimmy Jack Funk cleanly won a single match? Bad match, topped with an awkward ending makes this an unpleasant experience.

Looks like we're back to the syndicated leftovers. Joined slightly-in-progress with Steamer threatening to use karate chops. Steamer does his usual duck-under between the leg, then takes Rex down with a drop toehold. This is pretty much Steamer showing off his offense, a rest-hold, then Rex getting in a few shots. Rex is only on offense or in-control for maybe 20% of the match. Rex catches him on the apron, slingshots him in and delivers a scoop slam. Side backbreaker from Rex gets 2. They hit the ropes with Rex landing a backdrop and a grapevine Russian suplex for 1. We head to the finish, with Rex missing a dive from the second ropes. Steamboat with a slam, then lands a flying chop for 2. Backdrop from Steamboat, then he heads up again, this time landing his flying high cross-body press to get the 3. About 5 minutes longer than it needed to be.

Jones talks about his recent trips to Australia and Kuwait, as they try to put him over as a worldwide competitor. They talk a little bit about his recently-formed tag team with Paul Roma. What? You expected something else?

Leaping Lanny has a poem for us all. "Sivi Afi from Samoa is a very peaceful man. He'd rather save his talking for the ring. But now that we're together, with his big Hawaiian Punch, I'll just hold the rope and watch him do his thing". Cuz' Hawai'i is a part of Samoa, according to the future "Genius". Jimmy Kent looks like Les Thronton's brother, by the way. Kent Irish whips Poffo to the corner, where the Leaper climbs, does a backflip and applies a single leg takedown. Drop-kick to Navarro on the apron, for fun. Afi comes in for a shoulderblock and a clumsy powerslam for 2. Navarro tries to come in and gets slammed. Poffo with a head-scissors from a handstand. Kent finally tags off to Navarro, who takes over and slams Poffo. Kent comes off the second rope with a stomp and slams Poffo, twice. He goes up top, again, but Poffo knocks him down. Afi comes in for some flying headbutts and stuff. Poffo slams Kent, then goes up for his moonsault finsiher to get the pin. Really, not too bad of a match.

I think Stetson's the same guy who was around in the early days of ECW. Herc thumps away and tosses Stetson all over the ring. Two elbowsmashes as Herc makes the cover, but pulls him up. Vertical suplex, some more thumping, then Herc easily cinches in his backbreaker submission. These 1986 matches are making me wondering when Herc stopped giving a darn. He seems like a capable worker and not the slug he was from 1988 on.

I find it funny that the ring attendant takes Billy Jack's jacket, then wears his hat back to the locker room. Lively start as Lombardi sells very well for Haynes's power stuff. If ya' like seeing Haynes do powerslams and hit clotheslines, this is your match. Ya' get a reverse chinlock, too. Lombardi gets a few shots and a backbreaker, but Haynes easily bench-presses him off of the cover. Suplex and legdrop from Haynes, then it's only a matter of time until he locks in the full Nelson for the submission win.

Our feature match from MSG. This is the second half of the "roadblock" matches between these two teams, as we had Dynamite Kid vs. Brutus Beefcake, last week. Gorilla and Al are joined by Ernie Ladd, once again. Gorilla points out the absurdity of the ref holding up Smith's tag team belt, as if it's on the line. Ya' remember how "sometimes the Hammer needs about 30 minutes just to get warmed up"? This is one of those matches, as they stretch things out to fill the card. Basic holds, at the bell, with Hammer taking a few shortcuts. Whip reversal and a clothesline from Smith sends Hammer bailing to the floor. Criss-cross (JUMP! JUMP!) as Smith connects with a dropkick. Gorilla and Ladd actually reference Valentine's father, Johnny Valentine! Smith splits the legs, then turns it into a Scropion Deathlock, but Hammer makes the ropes. Back-and-forth for a good 10-15 minutes or so, as both guys dig deep into their arsenal. Suplex in from the apron gets 2 for Smith. Hammer takes over and goes into his usual wear-down holds. They go outside as Hammer gives him an up-close look at some ringside railing. Vertical suplex and Hammer actually lands his big spinning forearm drop, then wears him down with a reverse 3/4 Nelson. Kneedrop scores 2, then a side headlock occurs. Smith turns it into a belly-to-back for a quick cover. Hammer misses a charge into the corner, as Smith takes over. Big running powerslam... but only for 2! Hammer suckers Smith with the ol' chase around the ring, then knees him once they're back in and hooks in the figure four! Smith powers over to the ropes to break! Hammer tries again, but gets kicked to the corner. Smith is selling the leg injury from the figure four and stumbles right into a second-rope elbowdrop from Hammer. A little anti-climactic, but it scores the pin for Hammer. Since this was the ol' "split-up feuding tag team match", it seemed like this would be a throwaway, but it was a great showcase for what both guys could do. 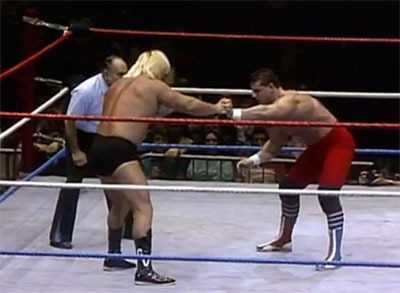 Pre-recorded as Vince McMahon is "hanging and banging in the gym" with the champ. Hogan whines about how he and Orndorff "broke bread together at Thanskgiving". We also get a quick video recap of Orndorff's heel turn; Flower Shop segments, phonecalls and all. Hogan claims to have flown to Tampa to talk with Orndorff before their match with Big John Studd and King Kong Bundy, but all Orndorff wanted to do was argue. "I thought this dude needed some space to clear his head out, man". In a questionable claim, Hogan insists he actually made a legal tag to Orndorff when he accidentally elbowed him off the apron. We see the replay of Orndorff deliveirng the piledriver to Hogan...and I think it's a little humorous that two or three little kids are jumping up-and-down in delight as it happens! Hogan claims that Orndorff sold out the country, along with everybody who believed in him. "The big wheels of Hulkamania are gonna' grind you up, man"!

Why'd You Watch This?:
We're back to filling time with this episode. Aside from the two MSG matches, these were all syndicated leftovers... with an emphasis on the word "leftovers". In the studio segments, Heenan is insistent on the Orndorff issue and isn't his usual sarcastic self; more of a straight-up jerk. The only studio segment that seemed like "vintage PTW" was with Heenan talking about all the "toys" he had as a kid ("Marilyn the corvette... a speedboat... Jessica.. and I can't forget Miss Betty..."). The main point of this show was to build up the Hogan/Orndorff issue, so it's understandable. I enjoyed Valentine/Smith more than I thought I would, but the rest is another forgettable episode.