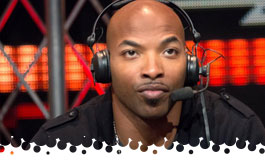 -Sure, there's the "Raw After 'Mania", then the "Smackdown After 'Mania"...but are you ready for the "Main Event After 'Mania"?! NO? Well TS, sunshine, here it comes! Who knows what kind of wacky antics and debuts we'll get. Our hosts for this event are Vic Joseph, Nigel McGuiness and Percy Watson...who's making his debut on Main Event. But with so much going on in World Wrestling Entertainment, let's get down to ringside for...

Since I care, I'll transcribe Andrews' entrance music for you: "Whoaaa-oooh! Whooaaa-ohh! Whooaa-ohhh! Whooaaa-oh!!" I'm sure it's available on iTunes and Spotify...but, why? Nese biels Andrews into the corner and slugs away. Andrews does a few flips, some spinning arm-drags, then tries a hurracanrana, which Nese blocks. Nese goes for a powerbomb, but Andrews flips out and they trade kicks. Nese with a roll-up off the ropes, but Andrews does another backflip, then drop-kicks him in the mush. Outside, where Andrews connects with a quick moonsault off the turnbuckles. Back in, Nese halts another aerial attack from Andrews, plants with a side back-breaker and gets 2. Nese uses some power clubbering to take over, including a "torture rack" backbreaker submission attempt. Andrews with a few desparation kicks, until he has enough energy to deliver a "619" kick, through the ropes. Two more flips and reversals as Andress hits a bulldog for 2. They lock-up and reverse some more, with Andrews landing a flying double-stomp. Andrews then goes up top for a shooting star press ("Fall to Pieces") and gets the pin. Looks like he only managed to nail Nese with his chin and arms, though. Well hey-- crisp and quick match. No complaints.

- We get our first offical flashback to WrestleMania, with a clipping from People Magazine of Kurt Angle and Ronda Rousey.

-Footage from RAW, featuring the ending of The Miz & The Miztourage vs. Seth Rollins, Finn Balor and Jeff Hardy. So, yeah, check out our RAW recap if you're into that.

-Let's recap some more, with the recent debuts of Peyton Royce, Billie Kay, No Way Jose and the return of Bobby Lashley.

The masked men have been dubbed the "Lucha House Party"... but Lince actually said, during the Cruiserweight Classic, that he's technically more "Puerto Rican style", which is a combo of lucha and other styles. It's splitting hairs; I'm just glad Lince is getting more exposure and the occassional tag team win, nowadays. Bad guys all come out to TJP's music, because it's awesome. Flying hurracanrana and dropkicks gets an early 2 for Lince on Daivari. Lince then swaps one counts with Gallagher via cradle reversals...but Lince gets the upper hand and turns it into an offensive rolling cradle move! Sorta' like the Oklahoma Roll. Both guys are wobbly and a "dazed" Lince falls on top of a "dazed" Gallagher for 2. Kalisto tags in for some nifty double-teaming/corssed arms/foot-to-the-jaw action on Gallagher. Kalisto gets a few kicks until Gallagher tosses him to the mat with a wasitlock takedown. Kalisto hooks ar arm, springboards off the ropes and delivers an flying armdrag. Daivari distracts Kalisto and the heels finally take over.

Quick "commercial" break and we come back to Gallagher working Kalisto's arms. Double-team delayed vertical suplex from Daivari and Gallagher gets 2. Daivari with a dragon sleeper DDT, then up top for the Persian Lion Splash...but the lake is dry! Both opponents tag off to TJP and Metalik, respectively, as we get a nice rope/rebound sequence! Metalik does his own version of the springboard arm-drag, but much more fluid than Kalisto's. Metalik walks the ropes and hits a drop-kick for 2. Gallagher and Daivari make the save, but Lince jumps in and hits both with a dual stunner, off the ropes! Kalisto and Lince both jump from the top of the tturnbuckles to the floor, taking out Gallagher and Daivari. Back inside, TJP gets a rolling side cradel on Metalik for 2. Metalik with a kick and a "sling blade" bulldog, of sorts. Metalik goes to the top and tightrope-walks the top rope to land a flying elbow which gets the 3 count pin. Not much more than a competitive squash for the Lucha House Party, but still a lot of fun to watch.

- We close out the show with about 15 minutes of WrestleMania, RAW and Smackdown recaps. Inclduing the brewing War of the Nut-shots between Shinsuke Nakamura and A.J. Styles. The final 5 minutes or so of theSmackdown match between Styles and Daniel Bryan is shown.

Why'd you Watch This?: It's only been about 4 years since I last recapped "Main Event", so I was due. Rating this strictly on the exclusive content...well, it's an appendix episode of 205 Live. While both are quality matches, they don't mean much of anything, and just seem to be filling time. I'm reminded of some of the completely random cruiserweight match-ups we used to get on WCW Thunder. Yet sometimes, it's perfectly fine to sit back and watch "wrestling for wrestling's sake". No storylines, no run-ins and no screwy finishes. You could watch these two matches anytime and not miss anything. Oh, but this episode did have one historic moment: Percy Watson debuted on commentary!