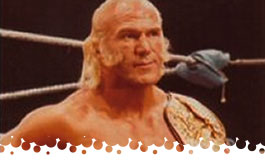 Our next available MSG show sees the now-FORMER champion Bruno Sammartino make a bid to reclaim his title from The Superstar Billy Graham!


Note: This is also the earliest available show to finally feature Howard Finkel as the MSG ring announcer, and sporting a wicked blue tux to boot!

Setup: Two bums open the show at the Garden, but at least we know one of them.
Match: Gonzalez has been seen before as a reliable jobber, but Nelson is a pasty white boy with what appears to be a Masonic symbol on his singlet. He sure loves the armbar though, and does a lot of it after the usual stalling. Eventually Jose gets fired up and hits three big dropkicks for the pin to delight the Garden Faithful.

Result: Gonzalez via pinfall at 9:46
Rating: 1 (Okay) Nelson only seemed to know how to do an armbar, but Jose at least got fired up.

Setup: Bruno's protégé needs a win to look good, so the jobber bum Tamayo turns the trick.
Match: Interesting seeing Larry as a humble babyface, but he sure is the scientific wrestling machine out there. One fan in the crowd REALLY seems to hate the Peruvian Rocky, as he taunts him with borderline racist verbiage. Eventually Larry pulls a small package out of nowhere as the ref makes a very slow three count. Way to make Tamayo seem like a fighter there, chief.

Result: Zbyszko via pinfall at 7:31
Rating: 1 (Okay) Did a good job of showcasing Larry's wrestling skills against an overmatched opponent.

Setup: Garea sports the wickedest perm this side of New Zealand, so they gotta throw him to the Animal.
Match: Steele really wasn't much of a wrestler, but boy do the fans HATE him, going crazy whenever he breaks rules or acts like a nutcase. This is mostly a kick and stomp fest from both men, with Steele finally pulling out a foreign object and using it to knock Garea flat, but alas the referee sees it and calls for the DQ, with plenty of wild action afterwards as Garea gets the object as well.

Result: Garea via DQ at 7:28
Rating: 2 (Good) The energy that these two generated from the crowd raised it up a notch.

Setup: Two of the most popular stars of the era team up against two powerful "loners", as McMahon describes them, with Patera vowing to bodyslam Andre.
Match: I feared the worst, thinking that Strongbow would carry the match while Andre camped out on the apron, but was pleasantly surprised to see the Giant pull his weight. Andre and Chief Jay both take cheap shots on Captain Lou prematch, and send him scurrying from ringside. Patera is said to be massively strong (despite his gut), while Volkoff was still in his prime. First fall is a DQ as Andre locks Nikolai in a bearhug only to have Kenny enter and slug the Giant to break it up, a ticktacky call at best from the ref. Second fall sees Nikolai and Patera argue frenetically before Patera knocks Volkoff on his ass and leaves him at the mercy of the Giant. Patera leaves ringside while Andre hits the big boot and splash for the pin.

Result: Andre and Strongbow via 2 Falls to 0 at 16:25
Rating: 2 (Good) Fun tag match that seemed to tease a Patera-Volkoff feud that never happened.

Setup: Stasiak is the former World Champion and is getting fed a bum in this midcard extravaganza.
Match: The best that can be said for the Jamaican newcomer Hurst is that he seems VERY earnest. Stasiak goes for the quick win with his heartpunch but gets countered. The match goes back and forth, probably longer than it should, until Stasiak gets tied up in the ropes. Lenny moves in, but Stasiak kicks him away. It must have been a hard kick, because Stan frees himself and hits the heartpunch for the win.

Result: Stasiak via pinfall at 8:21
Rating: 1 (Okay) Pretty much a glorified jobber match that went on for too long.

Setup: Graham had legendarily beaten Bruno on April 30 in Baltimore, and now was the big rematch in MSG.
Match: Bruno is sporting a wicked moustache for this bout, and Superstar talks some Sh*t in a pre-match interview. Sadly, this is much slower-paced than their past battles, with mostly an exchange of power holds milked for maximum time. Finally, when the down and dirty brawling starts, the dumbass ref keeps getting knocked down by both men, finally calling for the bell and eliciting a loud "BullSh*t!" chant from the crowd.

Setup: These two had gone to a 20 minute draw before in the Garden, and now supposedly this had a 30 minute time limit.
Match: Von Raschke is announced as "European Champion", but that doesn't mean much here. He also sports an Iron Cross on his robe and tights. Nice. I can see why the Baron went to so many draws in this era, because he LOVED the restholds, and Ivan is only too willing to play along. As the crowd gets restless and boos, McMahon covers by saying that their styles "don't mesh well". Baron gets his claw but Putski fights back and hits the Polish Hammer, but Baron falls out of the ring and recovers. Once again they go at it, but the bell rings! Funny, only 20 minutes have gone by, but McMahon and Finkel lie and say it was 30 (it sure felt like it). Putski asks for "1 more minute"(!) but the Baron will have none of it.

Setup: The Rock's Granddad makes his MSG debut against everyone's favorite 70s jobber.
Match: Alright, I think I get Scicluna's appeal now, as he basically was so inept that it actually was very funny to watch. Kicks and stomps by Scicluna early, but when the High Chief stands up to him, here comes his international object. Maivia will have none of this though, and slings Scicluna into the corner before rolling him up for a fast pin.

Result: Maivia via pinfall at 2:09
Rating: 1 (Okay) Hard to believe that BOTH men are Hall Of Famers.

Setup: All four men have not competed in MSG in some time, so the infamous curfew match is to bring them back.
Match: We all know the dreaded curfew, where everyone watches the clock and wastes time until 11:00 PM. Fatass Calhoun NEVER even tags into the match, and it proves to be a fatal error as Fuji scores the first fall with a kamikaze clothsline on DeNucci. Second Fall goes less than a minute until Magic Time, afterwards Finkel announces that since Fuji and Tanaka squeezed in a pin during the allotted time, that makes them the winners! Yay!

Overall Rating: 1.5 out of 3--Nothing too shabby, just better finishes would have improved things, but if you can't resist, make sure you get this from your most trusted online retailer.