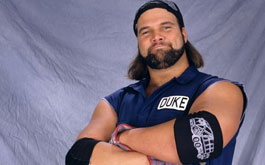 - I love finding shows that are from random locations. You always expect to see a handheld from Madison Square Garden, but KINGSTON, ONTARIO? I don't even know where that is! The information available online doesn't seem to match up with what is on this recording, so even the people in 1995 attending it were confused by what they've seen.

What a wonderful opener, assuming this is the true opening match. I guess Harvey Wippleman wasn't considered important enough to send along for the tour, but Dink was. Doink clowns around with the referee to set the mood for the match. Dink dances on the apron to annoy Kwang. Doink shows off his Crane technique as nothing happens. Doink with a drop toe hold and Dink runs across Kwang's back, but since he's a midget, it's perfectly legal. Kwang gets on his knees and challenges Dink, leading to a race around ringside. Back in the ring and Doink meets Kwang with an elbow. Doink with a dropkick, followed by a pair of arm drags. Dink is really working to keep this crowd into the match. Kwang with knees to the midsection and a thrust to the throat. Kwang celebrates by spitting his mist. Whip to the corner and Kwang makes a move for Dink, unsuccessfully. He casually hits Doink with a Super-Kick and goes for Dink, again. Doink makes the save by getting hit in the face. Doink counters a slam with an inside cradle for two. Back slide for two. Doink counters a knee lift with a rolling cradle for three at 7:32. Post-match, Doink clears Kwang from the ring. What an opener. ½*

- For reasons I can't explain, the Brooklyn Brawler picks a fight with... DOINK. WHAT IN THE HELL IS DOINK DOING OUT THERE AGAIN?! The Brawler plays chicken-sh*t heel on the arena floor as Doink challenges him to get into the ring. Doink finally has enough of waiting around and goes after the Brawler, and oh my God, please tell me they aren't fighting later in the show. That's a new way to get "Double Doink."

Mantaur is from "The Island of Crete", just in case I forgot to mention it elsewhere. I don't think the people recording this enjoy the gimmick. We're getting some real winners tonight. Mantaur attacks before the bell, tackling Droese into the corner. He takes Droese over with a hip toss, moos, then misses an elbow. Crisscross and Droese with a hip toss, followed by a dropkick. Mantaur catches a body press attempt and hits the forward powerslam for two. Mantaur with choking across the middle rope, followed by the straddled splash. Snap mare into a chin-lock. Droese escapes with elbows but runs into a knee. Whip to the ropes and Mantaur with a side slam for two. Droese fights out of another chin-lock and hammers away. Whip is reversed and Mantaur counters a sunset flip with a seated splash for two. Droese gets a boot up to counter a charge and a double clothesline puts both men down. Droese gets the better of a slugfest but unwisely goes for a slam. Mantaur with the corner avalanche. Droese reverses a whip, scoops Mantaur up for a slam, and hits a twisting elbow drop for three at 7:15. I'm surprised that move won, honestly. I'll give them credit, they tried. **

Is there no end to my suffering?! They clearly didn't shell out money to fly in managers, except Dink of course, because DINK. Tatanka immediately hides in the ropes to avoid contact. I have such high hopes for this one now. Tatanka with a cheap shot and a series of chops. Luger starts no-selling them and FLEXES. He blocks being sent into the turnbuckle and hammers away on Tatanka with rights. Luger blocks an inverted atomic drop and lays him out with a clothesline. Tatanka with a handful of tights to send Luger out of the ring. Babyface Luger is nearing atrocious levels in how much of a sucker he is. Back inside, Tatanka stomps on him like he was stomping out a wildlife fire. Whip and a chop for two. Tatanka with more kicks and chops. I guess that translates to little effort. Tatanka with a slam and the series of elbow drops for two. Heel Tatanka matches are so predictable I can set my watch to them. Flying chop to the head for two. Tatanka argues the count, allowing Luger to roll him up for two. Whip and Luger with a sunset flip for two. The match cuts a head a little (thank God), and Tatanka is still working Luger over. He sends Luger from corner to corner and grabs a bearhug. Luger escapes and takes Tatanka down with a back suplex. Luger no-sells the chops again. He boots Tatanka charging into the corner and hammers on him with rights. Luger with a fist to the midsection and a bulldog. Tatanka is flopping for clotheslines before Luger comes anywhere close to touching him. Whip and Luger surprises Tatanka with an inside cradle for three at 12:47 (shown). Ugh. The same F'N match these two have had for months, and all of them stink. ½*

People paid money for this show. This feels like I'm playing one of the early Smackdown games on PlayStation, where guys are randomly thrown into gimmick matches for no reason. Of course, the concept is Backlund has an obvious advantage, but it's still dumb. Who knew Backlund's deep lunges would get so much heel heat? Backlund teases the Chicken Wing early, then backs down when Bomb turns to face him. Backlund offers a handshake but Bomb rejects it. 3:00 after the bell and no contact is made. Shoot me, shoot me now. They finally lockup and Bomb escapes a waist-lock. Backlund tries it again with the same result. Bomb avoids the Chicken Wing but does nothing to follow up. 7:00 in, and this has been detailed PBP up to this moment. Bomb finally decides to try something offensive (other than stinking up the ring) by putting the boots to Backlund's leg. I can only imagine the submission Bomb would try. Bomb sweeps the leg and turns over the most half-hearted single-leg crab you'll ever see. This match is dying a slow, painful death. Backlund takes control, working the left arm. Bomb plays possum (stealing from Bret? HOW DARE YOU) and cradles Backlund because he's an idiot. Backlund with the Chicken-Wing to end this disaster at 11:11. Whoever booked this deserved to be fired. -**

Doink (the Clown) (w/ Dink) vs. The Brooklyn Brawler:

I'm amazed at the level of awfulness this show is reaching. You know, as a sick gag, I would book an entire card of Doink matches, where each match it's a different Doink, recycling talent repeatedly. Maybe the next match, have Lombardi as Doink to fight Mantaur, then stuff Doink into the costume and fight Backlund in a submission match. Doink pounds away and hits the Brawler with a clothesline. Doink with a slam, knee drop, and Hennig-style rolling neck snap. Whip to the ropes, Brawler with a boot to the chest and a clothesline. Dink climbs the ropes and body presses the Brawler, tripping over Doink school-boy style, and Doink stacks him up for three at 1:03. At least it was short, but what was the point?

I guess the Gunns gimmick is being fighting Champions, considering all the different teams they've defended against since winning them on January 23rd. Billy and Prichard start by playing to the crowd. Lockup and Billy goes for the arm. They trade hair pulls as they fight for control of a wristlock. Prichard with a side headlock and shoulder tackle. Crisscross and Billy hits Prichard with a bulldog for two. Bart tags in and works the arm. Prichard counters with a headlock but Bart quickly counters that with a head-scissors. Prichard gets to the ropes to force a break and complains about hair pulling. Bart continues to control, tossing Prichard with a press slam. Del Ray tags in, runs into a drop toe hold, and has his arm worked over now. Billy with a drop toe hold and Bart with an elbow drop to the back of the head. The Gunns hit the Sidewinder and Del Ray over-sells it so that a slight gust of air from being blown on knocks him over. Billy with a series of right hands and Del Ray does the over-sell a second time. Whip to the ropes and Prichard hits Bart from behind, allowing Del Ray to nail him with a double thrust to the throat. Del Ray with knees across the back. Whip to the ropes, double boot and double snap mare from the Bodies. Prichard with a snap mare into a modified surfboard. Bart fights free but Del Ray punts him in the chest to cut off the comeback. Prichard and Del Ray take advantage of an easily distracted referee. Whip to the ropes and Bart surprises Del Ray with a sunset flip for two. Del Ray quickly recovers and comes off the ropes with a diving clothesline for two. They do the front face-lock spot that gives us the unseen hot tag. Prichard with a snap mare into a chin-lock. Bart escapes with a jaw breaker and takes Prichard over with a suplex. Billy tags in and runs wild with right hands. Whip to the ropes and Del Ray catches him with a twisting DDT for two. Whip to the corner, Billy ducks a clothesline and takes Prichard over with a sunset flip for three at 14:52 to retain. On par with their usual effort, though a little slower. ***

Final Thoughts: This is a good example of why B-tours were being scaled back to almost nothing. Lex Luger vs. Tatanka is the only match that could reasonably called a Main Event, while the rest of the card is filled with underneath geeks who aren't over. I'm still baffled by the inclusion of Doink in a second match that only goes a minute. There couldn't be that much demand for him, especially in 1995 when the character was being sent to the glue factory. Strong recommendation to avoid, although we did get a surprisingly decent match from the Dumpster and Mantaur.