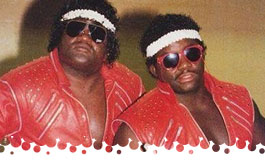 "From Boston to Beirut, from Oregon to Orinoco", it's wrestling from the world-famous Sportatorium in Dallas, Texas. That's a fun little intro from our host, Bill Mercer. He lists tonight's card, which will feature a main event with the brewing feud of Terry Gordy and Killer Khan. But with so much going on in World Class Championship Wrestling, let's get down to ringside for...

In case you didn't feel like watching TV, that night, here's a re-broadcast from the July 28 episode. The result is still the same: Gino uses a foreign object, and a ref bump, to steal a pin.

Back from commerical, Bill Mercer has an announcement: "in this violent world of muscles and sinew, we'll bring you now an artistic experience: a wrestling musical montage". I have no idea what the original tune was, but it's random footage of World Class action, with video effects. All the names you'd expect are shown, but there's some older footage of King Kong Bundy, the famous Andre/Iceman vs. Super D's match, and even Bugsy McGraw eating popcorn!

Finally some fresh footage, with the official in-ring return of "Sweet Brown Sugar", Skip Young. Young stars with a quick forward somersault to scare Kiniski away. Kiniski tries charging, but Young leaps away, then connects with an arm-drag and a drop-kick. Kinski tries to break out of a standing side headlock, but Young keeps it cinched with a side-mare/bulldog to the mat. To the ropes for some criss-cross (JUMP! JUMP!) action and Young lands a flying bodypress for 2. Young tries another charging attack, but Kiniski lifts him for a hangman clothesline on the ropes. Flying clothesline from Kiniski gets 2. Swinging neckbreaker and a kneedrop still can't put away Young, so Kiniksi settles into a headlock rest-hold. Kiniski slams and kicks Young, who gets the crowd mildly fired up with some jiggling. Side headlock on the mat, until Young makes the comeback. Young does a reverse leap, out of the corner, over Kiniski, then connects with a headbutt and a flying drop-kick from the second rope to get the pin at 6:22. Decent return for Young.

Afterwards, the Pretty Young Things (Norvell Ustin and Koko Ware) enter the ring, grab the house mic and slander Young, calling him an "Uncle Tom" and a "shoeshine boy". Ahem-- their words, not mine. They allude to a past association with Young. I think they crossed paths in Memphis, when Ware also used the name "Sweet Brown Sugar". The PYTs do a beatdown on Young, then leave. Again, it's downright odd seeing Koko (B) Ware as an angry heel.

Gino Hernandez interrupts the introductions and threatens Mike, saying that if it wasn't for the possibility of Stella Mae French at ringside, he'd still be champion. As Gino leaves, Mike grabs the mic and trolls him by saying: "Gino Hernandez-- I am your champion". Alright, that's kinda' funny. Irwin uses the distraction to attack, until Mike takes him to the mat with a flying headlock. Mike still has his HALF-SHIRT on, so of course Irwin chokes him. Mike with a leapfrog, drop-kick and then back to the mat. Irwin clubs ihis way into control, slams Mike, but misses a splash from the top. Mike is Mr. Action with...a standing side headlock.

For reason we'll soon discover, the camera catches the Waylon Jennings lookalike ringside security guy talking to Akbar and Scott Irwin, and they both depart quickly. Meanwhile, Bill Irwin pummels Mike and delivers a suplex and a running kneedrop for 2. Mike drops out of a press-slam attempts and rolls up Irwin for 2. Headlock to the mat cues up the "Go Mike, Go" chant. Mike with a running knee and a elbowdrop...and suddenly referee David Manning comes in and confers with Bronko Lubich. Manning has BREAKING NEWS: they'll have to halt this match, immediately, because Killer Khan and Terry Gordy are already brawling in the back and they need to get that match started, right now! A bloody Gordy, followed by Michael Hayes and Buddy Roberts, then rumbles into the ring! Heh... well this is definitely an usual booking practice. So let's get to...

Smart money says we don't get a pinfall in this one. Hayes slaps Gordy, twice, to get him fired up! Non-stop brawl, mixed in with some chokes, and the crowd is loving it! Gordy whips Khan for a big boot and Khan gets two reverse kicks for variety, but they're quickly back to duking it out. It's not much longer until all the ringside participants enter for a full-on 7 man brawl and (presumably) a double disqualification. Crowd goes nuts as Hayes goes after Akbar! Khan tries the Oriental Spike on Hayes, but Gordy saves with his own attempt. The trusty ol' FREEBIRD BOOT even comes into play. The entire lock room then empties (well, everybody who's not in an important feud) as everyone tries to break it up. Hayes hops out and grabs a wooden chair to brain Scott Irwin, as the ring is finally cleared. Not a match, but I LOVE pissed-off Terry Gordy and this was about as good of a hate-fueled/pull-apart brawl as you can get.

They even bring back ring announcer Ralph Pulley to tell us that this match will now resume. They grapple with hammerlocks, then hit the ropes so Mike can land a drop-kick. Irwin is primarily punchy/kicky and in control. Akbar and "Hog" Irwin suddenly return, and use a bullwhip to set up a potential clothesline in the corner. Mike reverses an Irish whip and "Wild" Bill becomes the victim of the clothesline. Mike's quick to make the 3 count pin at a total time of 11:18. Yup, the ol' "slip on a banana peel" pinfall. Afterwards, Akbar and the Irwins beat away on Mike until Buck Zumhofe makes the save.

In the final segments, Mercer goes a brief summary of tonight's show, even mentioning the "Sweet Young Things". Heh. Come back, next week, when our main event will be Kerry Von Erich taking on Michael Hayes in a lumberjack match!

Why'd You Watch This?:
This episode appears to be from the same taping as last week's, which explains why there are no Von Erichs aside from Mike, nor Chris Adams or King Parsons. I'm liking the PYT's as arrogant bullies yet it is kinda' funny how two guys with a Michael Jackson look are heels in the midst of 1984 and "Thriller-mania". Back then, I remember a lot of folks (like my brother) saying: "gawd, I hate Michael Jackson", so maybe there's something to that?

I don't think I ever really noticed that Bill Irwin is such a serviceable in-ring hand. He's not flashy, but he does his job well and seems to be a guy they always turn to. He's sorta' like the Bobby Eaton of World Class (although you can split hairs and say Eaton was flashier... which is why I used the word SORTA'). The Mike Von Erich experiment continues and it's more about giving the fans another Von Erich to cheer for, as he has nothing but name recognition at this point.

I didn't think I'd ever say this, but Killer Khan is a highlight of this episode! Gordy's antics certainly help, and you probably know that I'm a huge fan of anything that matches up the Freebirds and Devastation, Inc. Khan/Gordy and the PYTs' beatdown combine to give episode this a slightly-above-average recommendation.