Not sure what spurred them, but WWE Network appears to be slowly adding new "territory" stuff and finally filling out their "Vault" section. So, umm, watch out.

We still get the DRUM opening! Yet only two highlights are zapped by the satellite-- both appear to be from 1985 or earlier and big Texas Stadium shows. Bill Mercer welcomes us to the show and pumps up the ongoing Tag Team Championship Tournament, which will figure into our Main Event...of the Evening. The World Class roster has been hit by injuries, departures and, unfortunately, death (Gino Hernandez). Size-wise, the crowd at the Sportatorium appears to be back to the 1982 era, when stuff like Bugsy McGraw vs. Bill Irwin was featured. But with so much going on in World Class Championship Wrestling, let's get down to ringside for...

Quick, if you're not familiar with World Class, who would you think is wearing the mask in this match? Yeah, I'm a little surprised that the masked luchador has the full name of "Raul Castro". Why the mask, then? Was there some Lucha Libre stipulation where he lost a catchy ring-name, but got to keep his mask? Castro attacks while Zulu's stretching, but gets tossed around and whipped into the ropes for a fist to the tummy. Zulu continues the attack with a knife-edge chop, headbutt, big boot and a charging shoulderblock. Zulu thumps Castro around for a bit, then cinches in a bearhug to get the submission win. Crowd did not seem to like this match, at all. Afterwards, Zulu grabs the house mic and says he's after Abdullah the Butcher, who injured his brother in Puerto Rico.

From a week or two, back, and it looks like we're at Reunion Arena for World Class's "other show". Marc Lowrance has the call. Brody storms to the ring and brawl is ON, as soon as he clears the ropes. Brody wants to use the house mic as a weapon, but referee David Manning tries to stop him. Abby uses the lull to grab a trusty Foreign Object and stabs Brody in the mush. Both guys blade, with Abby taking control. I'm not sure, but it looks like Abby hits either a Flying Reverse Dragon Tiger Suplex or a headbutt... tough to tell. Manning goes on a frickin' mission to find the Foreign Object, but Abby keeps hiding it. Brody fights back and knocks Abby to the floor. Brody smacks him with a chair and they go into the crowd. E-C-Dub! E-C-Dub! They brawl back to the backstage area...where Gary Hart shuts the door and keeps Manning away. After a short break, the door opens and Brody's blasting Abby with a 2x4! Back to the ring, where the bell sounds (double DQ?) and Brody keeps stabbing Abby with the 2x4! Hart makes the save by smacking Brody with a chair. Abby gets the 2x4 and goes to work, as the ring announcer grabs the mic and asks for "help from the wrestlers from the back"! The Batten Twins arrive, but get their tushies kicked. Hart is incensed and throws a chair at second ref, Mark Hazzard! Things finally simmer down, as Bronko Lubich and Hazzard help a bloody Brody to the back. Abby eats a ring rope for good measure. Official annoucement is made that, yup, it was a double disqualification. Nothing but a brawl, but damn if it wasn't hella' fun. Senseless violence rules, sometimes. 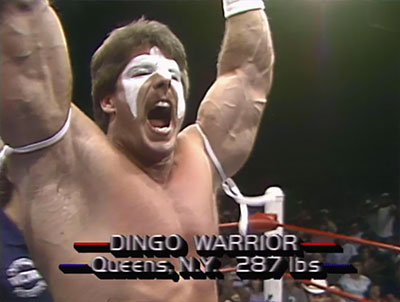 Adams is the reigning WCCW World Heavyweight Champion, but this is non-title. They stalk each other, until Percy Pringle arrives, grabs the house mic and gets up on the apron to demand a rematch. For who, he doesn't say... but he wants a rematch, dammit! I'm assuming Rick Rood (aka. "Rick Rude"). Pringle smacks Admas with the mic and his cane, allowing Dingo to take over. BIG gorilla-press, then Dingo slams Adams's neck on the top rope. Elevated choke-hold to work the neck, some more. Adams fights out and super-kicks Dingo through the ropes. Dingo thinks about tossing the wooden steps in, but walks back in to another super-kick. Adams with a clean piledriver, then he climbs to the top. Dingo catches him and slams him in a very sloppy fashion. Another neck-drop on the top rope, then Dingo drops an elbow and gets the 3 count! Adams complains about getting his shoulder up at the last second, to no avail. Well, that was...curious booking for your "World Champ".

Kerry's currently rehabbing an injury...so here's a look back to brighter days and 1984. Before we complain about how they're recycling old stuff, consider that the WWF was also doing this, at the time, over on Prime Time Wrestling. The Penultimate Knucklelock Challenge to start. Kerry with a backdrop, then they fight over a wristlock, which Kerry turns into an armbar. Super D misses a dropkick, but Kerry's finds the mark, knocking him over the ropes. Back inside, Super D goes punchy/kicky, then whips Kerry in for a backdrop, a double-chop to the neck and a 2 count. Kerry slugs back, lands a discus punch and a charging shoulderblock, but misses another and gets shoved through the ropes. Super D suplexes him back in for 2. He goes for the super-pex, but Kerry shoves him and hits a reverse flying elbow to get the 3. As Mercer mentioned, this was a "tune up match for the Championship", as they were building Kerry for Ric Flair.

It's implied that this is a qualifying match for an upcoming Tag Team Championship Tournament. Borne and Adias start, with Adias getting a backdrop and an armdrag. Tag to Youngblood for a flying chop from the turnbuckle and an arm-wringer. Sawyer comes in for more arm-wringer "action". Sawyer lands a reverse elbow, then things switch off to Adias and Borne doing arm-wringers. Borne backdrops Youngblood, but misses a kneedrop. Yup, more arm-wringer from Youngblood. Kneelift from Borne, then Sawyer's into to get his arm wrung. Clothesline from Sawyer cleaves Adias, then Borne with a suplex for a 1 count. Side backbreaker gets 2 for Sawyer. Borne returns with a belly-to-belly for 2. A fron headlock happens. Adias powers out with a slam, then make the lukewarm tag to Youngblood. Chops all around. Youngblood hits the ropes, but Sawyer pulls his hair to send him to the canvas. Borne is quick to land a flying elbow and get the 3 count.

Bill Mercer has his final segment, where he previews next week card, featuring Dingo Warrior vs. Rick Rood. "So long, everybody".

Why'd You Watch This?:
A very bland episode as the action was incredibly ordinary and straightforward. I'm always thrilled to see old Dingo Warrior footage, but the only thing truly worth watching is the replay of Brody/Abdullah. I'm pretty sure I've seen that match on other compilations or episodes. Kerry/Super D is just filler and the 3 "live" matches are all garbage. So, nothing to see here. Carry on.