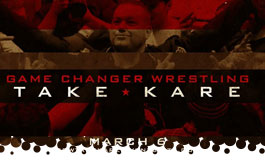 Live from The Showboat in Atlantic City, New Jersey, in front of live fans. Not everyone is social distancing, so let's hope they've been vaccinated.

The advertised main event is curtain jerking, does someone have a plane to catch? I hope this isn't another 30+ minute cringefest like they put on Good Riddance. Lloyd looks for a rollup but gets arm dragged into the wire. Lloyd reverses a whip and G-Raver takes a turn in the wire. Lloyd retrieves a wirecutter out of the blue and clips free some barbed wire and blasts Raver in the forehead. Raver now has enough clearing to hit a tope suicida. Raver wraps some uncooperative wire around Lloyd's arm and hits some stomps. Raver buries Lloyd under a wired board and hits a back senton. Draping DDT by Raver and a running kick to the face. Raver completely clears out a side of wire, but Lloyd piledrives him off the apron through a wired board! Raver answers with a half nelson suplex, then leaps off a chair to hit Meteora, sending Lloyd crashing through barbed wire and doors. Lloyd is so tangled in wire that the crew has to clip him free Back to the ring, Lloyd hits a desperation piledriver for 2. Lloyd hits a DVD through the wired ropes to the floor! They're stuck together in a tanged heap and have to be clipped free again. Lloyd hauls Raver back for a Ganso Bomb, but Raver pops up at 1. Lloyd hits another Ganso Bomb onto a thickly wrapped chair and wins at 17:50. It's amazing how a match this violent could also be such a snooze. The live fans loved it though, and the later sick bumps were something to behold, **¼. Winner: Jimmy Lloyd

A limo arrives with 44OH. Ricky Shane Page tells the guys to take the night off while he takes care of Janela, who is putting his “Spring Break” event on the line in a title match tonight.

The ring crew can't get the normal ropes set up fast enough while Charles Mason walks around getting cheap heat by insulting the overweight and nerdy fans in attendance.

Warner pops Mason in the face and unloads chops into the corner. Warner throws Mason into the crowd and through some chairs. The fans really enjoy Warner's chair shots, almost as if they've been stuck in their homes for the last year or something. Mason avoids a chokeslam through a door, and takes control with a lariat. Mason hits a DVD through a pair of standing chairs for 2. Warner answers with a drop toe hold through a chair. Warner plants Mason on a door and wins at 7:49. Boring garbage brawl, but again, the crowd loved it, maybe you had to be there, *½.
Winner: Mance Warner

Lee uses his quickness to hit an enziguri, but he misses a dropkick and Tankman blocks an arm drag. Lee uses his gymnastics prowess to evade Tankman and hit a dropkick. Rana by Lee and then a springboard dropkick. Lee looks for a second springboard dropkick and gets F-5ed onto the apron! Tankman's late cover gets 2, and they trade chops. Tankman builds some steam and hits a scoop slam for 2. Lee hits a flurry of chops but Tankman head butts him down hard. Lee recovers with an enziguri and springboard lariat. Lee amusingly misses a standing SSP, but it's not a big deal, Tankman slips away, but then Lee botches a back handspring dive. Lee gets another mulligan and hits the dive. The fans are being super nice about the botches. 450 splash by Lee gets 2. Lee takes way too long setting up a shooting star DDT but at least he hits the move properly and gets a good nearfall out of it. Lee bounces into Tankman's backbreaker for 2. They battle on the top rope and muck up the finish when Tankman can't quite get Lee on his shoulders and they fall down together. It looked like Lee might have countered into a sunset bomb of sorts, but Tankman acts like he hit the right move and wins at 9:59. This just kept unraveling. It happens, *.
Winner: Calvin Tankman

Atticus Cogar respects Effy, but he's going to beat him up anyway, and maybe force him to join 44OH.

Cogar offers up a 44OH t-shirt, prompting a hot start by Effy. Cogar is forced to retreat, but then blocks Effy's dive with a random light tube! Effy has been busted open, and Cogar continues carving his forehead with light bulbs. Cogar retrieves his neon green skewer sticks and impales Effy's back. Effy hits a defiant thrust kick and DDT for 2. Effy sets some light tubes on a chair, but Cogar puts him through it with an Air Raid Crash! Vertical suplex by Cogar but he misses a moonsault, and Effy hits a flying blockbuster or some sort. Effy hits a back suplex and running lariat for 2. Effy lariats some light tubes into Cogar's face for another nearfall. Cogar hits a reverse low blow kick and sticks the skewers into the top of Effy's head before a suplex for the win at 7:51. Nasty bit of business, **.
Winner: Atticus Cogar

44OH comes to the ring to recruit Effy. Rickey Shane Page wants to know if Effy is content being “the gay guy in GCW” and is ready to be “the guy” of 44.OH! Effy accepts the t-shirt and embraces Page. This was rather incoherent, with the nasty heel faction recruiting someone they just beat, but moving on...

Shlak is too injured to compete tonight, but his mouth works just fine, and enjoys himself on commentary. Nolan looks like a teenager and Colon aggressively tells him this match is his audition. The ring crew left glass doors in opposite turnbuckles for reasons. They lock knuckles and hold on while trading forearms. Colon blocks a powerbomb and whips Nolan through the glass door. Colon follows with a vertical suplex onto the debris. Colon lands a tope suicida and breaks some light tubes over Nolan's face. Colon hits a running lariat through onto a seated Nolan. Colon carves the forward with a broken beer bottle. Nolan catches Colon in the ropes with a boot and puts him through a bridged glass sheet with a sick neckbreaker. For the record, Shlak's commentary is cracking me up. “Never go full Shlak, only I can go full Shlak, and even then…” Nolan leaps off a chair for a kick, but Colon answers with a drop toe hold onto another chair. Shlak wants to know why “Take Kare” has a K in it, and admits he's not great with phonics. Meanwhile, Nolan catches Colon with a running sitout powerbomb through some glass! Nolan forces Colon to eat glass shards and kicks him in the face. Nolan goes full Sabu by throwing a chair and suplexes Colon onto the chair for 2. Nolan bridges another glass sheet on the buckles and a chair and looks for a super piledriver. Colon counters with a diving foot stomp through the glass! NOLAN KICKS OUT! Colon places another sheet onto top of Nolan for a running double knees, and Nolan kicks out again. They slug it out on their knees and throw broken glass. Colon knees the head and applies a camel clutch in the debris, but Nolan crawls to the ropes. Nolan hits a Falcon Arrow in the debris for 2. Nolan sets a barbed wire door up on some chair, and slides a glass sheet through the wires. Colon puts Nolan through the props with a Spanish Fly, but NOLAN KICKS OUT AGAIN! Colon totally loses his temper, smashing bits of door over Nolan, and finishes with the camel clutch at 19:15. This was one of the better death matches I've witnessed, I didn't know who Nolan was, but I do now, ****
Winner: Alex Colon

Shlak challenges Nolan to a death match at Planet Death. Fans chant for Nolan as he limps to the back.

Deppen takes the fight right to Broadway before the bell and hits a quick dive. Broadway repays the dive, still in his entrance jacket. Missile dropkick by Broadway and a flying rana. Neckbreaker/suplex combo by Broadway gets 2. Deppen looks for an octopus but Broadway shrugs him off. Deppen trips and dropkicks the head. Deppen controls the pace with a variety of crafty submission holds. Broadway rallies and sets Deppen in the buckles for an enziguri and lung blower for 2. They both go for bicycle kicks at once, and slug it out. Deppen reverses a powerbomb into a guillotine choke, but Broadway breaks out with a Northern Lights Suplex. Deppen quickly reapplies the guillotine. Broadway likely concusses Deppen with a high elevation German suplex. They stand nose to nose and slug it out again, and Broadway hits a penalty kick for 1. Deppen slaps but Broadway hits a Falcon Arrow, then misses a moonsault. Leaping knee by Deppen and then a slick knee drop to the back of the head. Tornado DDT by Deppen, and MMA elbows. Deppen finishes with Cattle Mutilation at 12:55! Solid exhibition, Broadway was shaking off ring rust, and Deppen is learning how to be an undersized killer, ***.
Winner: Tony Deppen

They lock up and Gray gains control with a hammerlock. Oliver reverses a knee bar into a bow and arrow variation, but Gray counters into a headlock. Oliver breaks a waistlock and wiggles free from Gray's armbar attempt. Gray takes Oliver down with a knuckle lock, but Oliver bridges up to reverse. In a night full of death matches, this high-level technical wrestling is a joy to behold. Gray builds some momentum with a power slam for 1, and goes for a chinlock. Oliver counters with a backslide, and they trade wild shots. Gray chops the chest and drives Oliver into the canvas. Moonsault by Gray gets 2. They trade chops, and Gray goes nuts on a flurry of strikes. Enziguri by Oliver and leaping cutter, followed by a Figure Four. Gray survives, so Oliver dropkicks him into the crowd. Gray comes back with a superplex for 2. Stunner by Oliver, but Gray counters into a sick lariat. Oliver answers with a powerbomb and Boston Crab. Gray escapes and hits a Tiger Suplex. Oliver pops up and counters into a jackknife pin for win at 17:14. Good match that felt a little disjointed and random in the final stretch, ***.
Winner: Jordan Oliver