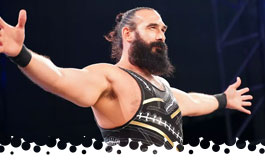 Live from Daily's Place. This is a special "Celebration of the life of Brodie Lee" episode, therefore this will be more a straight up recap and less of a review. I won't give out any star ratings, unless something really pops out at a MOTYC level. The untimely death of Brodie Lee has sent shockwaves throughout the wrestling industry and fanbase, so as a fan, I'm seeking closure and catharsis from this broadcast. Our hosts are Jim Ross, Tony Shiavone, and Excalibur.

Show opens with the entire AEW roster and crew gathered on the stage with Brodie's wife and sons for a ten bell salute. They cut to a testimonial by Jon Moxley, who reminisces about all the years he and Lee spent together, and how wrestling was a job to Lee, his true purpose was his family, which was something that Moxley couldn't relate to until recently. Moxley hopes we'll all use Lee's example to be better and treat every day like it's special.

Chris Jericho has joined commentary. Colt looks really choked up, and it strikes a nerve with me. Colt runs the ropes with Kassidy and abruptly stops for a sly headlock. Quen tags, but the Bucks serve him up for Colt's chop. The triple team continues until the ring is cleared for a dive festival, capped off by Colt's Asai moonsault. Hardy tries to restore order with a sleeper on Nick. Matt tags himself in to superkick Hardy, and Bucks hit Poetry in Motion and stereo dropkicks. Quen saves Hardy with a dive onto Matt, who settles in as the face in peril. Hardy spends too much time showboating and Colt storms in to hit a springboard moonsault on a hot tag. Cabana hits a rana on Quen and Flying Apple on Kassidy for 2. Hardy blocks a tag to Nick, and helps Kassidy set up a crucifix pin for 2. Quen's flying crossbody also gets 2 on Cabana. Hardy directs Private Party to climb the ropes, but Colt shoves him into Quen, which allows Nick's super rana. Hardy dumps Matt and Colt over the rails, but Nick kicks the face and moonsaults onto him. Nick suffers Gin n' Juice and the Twist of Fate! Swanton Bomb by Kassidy and SSP by Quen, but Colt makes the last second save for Nick! Hardy grabs a chair, but Quen isn't on the same page. Colt blocks Gin n' Juice and hits the Chicago Skyline on Kassidy while the Bucks hit the Meltzer Driver on Kassidy, giving Colt the superman pin for the win at 13:31. I know I said I wasn't doing star ratings, but this was awesome stuff, not just an exhibition with the turmoil between Hardy and Private Party, and an emotional moment for Colt, ****.
Winners: Colt Cabana and Young Bucks

The Acclaimed arrive to talk some trash, but SCU dump them into the ring for a beatdown from the Bucks and Cabana.

Video testimonial from Darby Allin, who tells a story about meeting Brodie for the first time and finding that he had no ego and wanted to lift everyone up. Darby regrets never having wrestled him.

The Dark Order (Evil Uno and Stu Grayson) and Lance Archer (with Jake Roberts) vs. Eddie Kingston, The Butcher, and The Blade (with The Bunny)

Archer is dressed up like Luke Harper. Eddie dedicates the match to Brodie, but the Dark Order is nothing without him, so he's going to be up some cowards. Uno punches Eddie right in the head and the match starts with a wild brawl. Stu and Uno suplex Archer onto Kingston. Bunny grabs Stu's leg to allow Butcher and Blade to take control of the match. Jake returns the favor by pulling Blade's leg, allowing Stu to hit a power slam. Cue the commercial! Back from break, Eddie and Uno are lighting each other up with slaps. Uno fires off a half n' half suplex. Archer gets the (phantom) hot tag and destroys Blade with a chokeslam. Archer walks the ropes for a sick moonsault! Butcher steps up but Archer plows him with a POUNCE! Stu's splash nearly finishes Blade, but Eddie saves him. Kingston hits a DDT on Stu, stares at Roberts, but STU KICKS OUT! Stu saves himself with double kicks and Archer gets a second hot tag, but Eddie saves Blade from Blackout. Grayson hits Butcher with a leaping DDT onto the apron, and helps Uno finish Blade with FATALITY at 10:10. Another really strong tag team outing and emotional moment for the victors.
Winners: The Dark Order and Lance Archer

Eddie pays for his rudeness and eats a short arm clothesline from Jake Roberts. Excuse me while I mark out.

Video package highlighting what kind of family man Brodie was.

Hangman Adam Page and The Dark Order (Alex Reynolds and John Silver) vs. The Inner Circle (MJF, Santana, and Ortiz, with The Wardlow, Jake Hager, and Sammy Guevara)

Silver and Reynolds pay tribute to Lee by throwing papers at the Inner Circle before the bell. Jericho warns us about the real dangers of paper cuts as Page throws a paper into MJF's face. MJF then goes full heel by screaming in the face of Brodie Jr. at ringside. Meanwhile, Silver and Santana run the ropes in an exchange. Reynolds enters with a Sunset Flip and flying forearm. Santana cuts him off with a cutter off the buckles. Santana hits rolling suplexes and Ortiz tags for a tandem suplex. Page gets a hot tag and runs wild through the Inner Circle. MJF flees the Buckshot Lariat, and Santana and Ortiz set him up for a weird body drop type attack by MJF. Inner Circle take control of Page in time for a commercial. Back from break, MJF flies into Page's boot, and Silver storms in like a wrecking ball. Santana cuts Silver off with a cutter, but Reynolds helps with a double stomp. Ortiz spinebusters Reynolds, Page helps but MJF whips him into the buckles. Silver head scissors over MJF to hit a nasty Destroyer! Silver gets caught up in the moment, and MJF snaps his neck on the ropes, and he gets eaten alive by Santana and Ortiz. Reynolds saves the match, but Silver looks dead. Wardlow struts in to clothesline Reynolds, and ERICK ROWAN runs in and drops him with a chokeslam! That leaves the Dark Order free to swarm Santana and Page's Buckshot Lariat, but MJF drapes Santana's foot on the ropes. MJF rips the mask off Brodie Jr, who responds with a KENDO STICK SHOT! No way! That leaves Ortiz in a 3 on 1 situation, and Silver lariats him for the win at 13:05! This was nothing short of incredible, ****.
Winners: The Dark Order and Hangman Page

Erick Rowan returns to the ring for an emotional embrace with the Dark Order. He holds up a sign stating "Goodbye for now, my brother."

Video testimonial with Eddie Kingston. Eddie chokes up and speaks directly to Brodie's sons, stating that Lee will never be gone as long as they remember him.

Anna Jay and Tay Conti (with The Dark Order) vs. Penelope Ford (with Kip Sabian and Miro) and Dr. Britt Baker (with Rebel not Reba)

Anna locks up with Britt and scores a headlock takedown. Britt counters with a hammerlock, but Anna reverses into a headlock and shoulder block. Britt slips away and Ford storms in for a DDT. Ford gets double teamed, and Conti hits explosive arm drags. Britt's interference lets Ford hit Conti with a German suplex. Rebel helps to set Conti in place for Ford's slingshot knee drop, and we head to commercial with Conti in loads of trouble. Back from break, Conti kicks Ford in the face to buy enough time for a hot tag. Jay storms in with fiery clotheslines and a somersault neckbreaker. Jay rolls into a kick to Britt's head. Ford ambushes, but Conti helps with a power slam. Britt hits Conti with Sling Blade, but Jay counters her with a heel kick. Jay loses her composure while doing the Dark Order hand gesture, and Britt hits a Fisherman buster for 2. Ford's flying neckbreaker gets 2 on Jay. Ford back hand springs into Jay's Queenslayer for the submission at 9:53. Great showing from all the participants.
Winners: Anna Jay and Tay Conti

Tony Shiavone gets a word with Britt Baker, who is fed up with the conspiracy against her in AEW. She plays the Trump card, stating that everything is rigged against her. Thunder Rosa runs in for an attack, and officials have to pull them apart.

Video testimonial with Chris Jericho. He got to work with Lee 27 times, including a show in Saudi Arabia. Jericho was annoyed by a sticker in his hotel room, and Lee pointed out that it was an arrow to Mecca. He knew so much trivia, in addition to being one of the best in-ring performers Jericho has known. Jericho touts that Lee was one of the only strangers his dog ever liked, which may sound strange to you, but I totally understand.

The babyface team are Brodie Jr's favorite wrestlers, in case you were wondering what the logic of this match was. Team Taz looks for a hot start, and Starks puts Cody down with a shoulder tackle. Cody wrenches the arm but is thrown off by OC's lack of interest in a tag, so 10 gets the nod. Hobbs' cheapshot on 10 gives Starks a brief advantage, but 10 comes roaring back with a catapult German Suplex. OC finally accepts a tag and but rejects Hobbs' knuckle lock by putting hands in pockets. OC continues to annoy Hobbs as they head to a commercial. Back from break, OC is getting picked apart by Team Taz. OC reverses a suplex on Starks, and Cody gets the hot tag. Cody's housecleaning is interrupted by a Starks clothesline that leaves them both down. 10 gets a tag and storms in with rapid clotheslines. 10 hits Starks with a Jackhammer and follows with a powerbomb. Starks answers with a spear, but OC saves the match. OC then counters into a tornado DDT on Starks, but Hobbs knocks him down with a clothesline. Cody gets caught by Cage's slam, but 10 clears the ring for a tornado DDT on Starks. Taz and Arn duel with chairs on the ramp. OC hits the Orange Punch onf Starks, serving him for Cross Rhodes and 10's Spinebuster for the win at 11:33. Another good match, and another cool win for a Dark Order minion.
Winners: 10, Orange Cassidy, and Cody Rhodes

Team Taz sour the mood with a post-match beatdown, but then the lights go out. Darby Allin arrives with skateboard in hand. Lights go out again and it's snowing in Jacksonville, which means IT'S STIIIIIIIIING! Darby and Sting enter the ring unified together to clear out Team Taz.

Back from commercial, Cody Rhodes is in the ring with a mic while the crowd chants for Brodie. Cody says you can judge a person by how he treats those who can't offer him anything, and refers to the endless stories people have been telling about what Lee did for them. Cody chokes up and calls Lee a beautiful man. Cody invites "Negative 1" Brodie Lee Junior to the ring. Lee's son and wife come to the ring, and they symbolically place a Dark Order mask on a pair of boots. Tony Khan is with them and presents young Brodie with a TNT title, and declares him champion for life. The fans chant for Brodie and it's a beautiful scene. Khan thanks the fans and cuts to a tribute video for Brodie (and it's a good one).

Final Thoughts: Rest in Peace, Brodie. Thank you for many great memories and being a shining example of goodness in the pro wrestling industry. You will be greatly missed and we will not forget you.