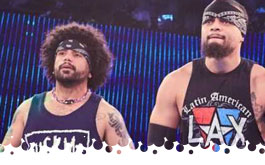 From Daily's Place in Jacksonville, Florida. Our hosts are Jim Ross, Tony Shiavone, and fresh from exile, Excalibur.

Santana and Ortiz vs. Best Friends (Chuck Taylor and Trent)

Best Friends sneak attack during entrances. Santana and Ortiz prepare a double suplex on Chuck, but Trent saves with a plancha off the stage! Best Friends attempt a suplex onto the steps. Ortiz chokes Trent while Chuck stacks some chairs for something nasty, but he's the one who gets tossed through the structure. Bell finally rings, and it's effectively a handicap match with Taylor dead on the floor. Trent buys some time with a tornado DDT but there's no one to tag. Trent hits Ortiz with a dive, but then misses a spear on Santana and crashes into the rail. Trent recovers and a dazed Chuck makes the hot tag. Chuck hits a somersault senton over the ropes. Sole Food on Santana and Falcon Arrow! Ortiz saves, but Chuck recovers with a sunset flip. Trent returns with a running knee, but Ortiz holds him still while Santana shoves him off the apron onto the ring steps. Street Sweeper is blocked and Trent hits a piledriver on Santana, but Ortiz provides a rope break assist. Santana wacks Trent's spine with a baton, and the Street Sweeper ends it at 6:53! Intense brawl, and a good example of having heels use nefarious means to win but still extend a feud, without resorting to DQ's or distraction finishes, ***.
Winners: Santana and Ortiz

MJF and Wardlow have to knock some sense into the lawyer, who is having some serious cold feet about facing Jon Moxley. MJF says there's nothing scarier than getting in the way of his goals, so he better get into the ring or get into a (bleep) woodchipper!

The winning team faces each other at All Out, so basically these eight guys are fighting for a PPV payday. Bucks are all business tonight, skipping their entrance pose, but once the bell rings all 8 guys give off a sense of urgency. Well, not Kassidy, who dances after hitting a rana on Matt, who angrily rips up a fan's Hangman Page sign. Nick makes a blind tag to save his brother from Daniels, and they double team him with a draping double stomp. Daniels escapes and tags Kazarian, who looks so good while cleaning house, I wonder why AEW isn't doing more with him. SCU and Private Party pick apart Jungle Boy during a picture-in-picture break. Back from break, Jungle Boy takes advantage of a miscue between SCU and Private Party, and Luchasaurus goes on a rampage. The match breaks down, and SCU hit Jungle Boy with a neckbreaker/powerbomb combo, and Kassidy splashes him for a good nearfall. Matt misses a superkick and hits Jungle Boy, leaving him down for Daniels' Best Moonsault Ever and Quen's SSP, and Luchasaurus barely saves the match. Jurassic Express hit a tandem power slam for 2. Jungle Boy takes out Kassidy and Kazarian with a dive, which leaves the Young Bucks to finish Quen with a BTE Trigger at 14:15. This was a bit padded for time but got pretty good near the end. I wasn't really feeling the stips on this one either, **¾.
Winners: Young Bucks and Jurassic Express

Jake Hager finds Orange Cassidy chilling in the back and takes a seat next to him. Jericho has requested OC at ringside for his match tonight, and it would be "smart" for him to be there.

Tully Blanchard gives FTR a pep talk backstage. He's pleased that they won the gauntlet match, but now it's time to go take the Tag Team titles at All Out, because Page and Omega won't be giving them away. They like Page and all, but they want money and prestige.

Tony Shiavone hosts Kenny Omega in the ring for a rare interview about recent Elite drama. Omega says that Page will have to live with his mistakes for the rest of his life, but they will still be Tag Team Champions after All Out. They're interrupted when FTR and Tully bring a foam cooler to the ring. Dax Harwood has been impressed by Omega and Page's run and want a chocolate milk toast to the great professional wrestling match they're going to have. Omega rejects FTR as the censors scramble to cover his insults. Hangman Page arrives with bloodshot eyes and a whiskey, not sure what to do. FTR argue that no one forced Page to betray the Young Bucks last week and call him an insecure little boy. Page almost loses his temper on both FTR and Omega, but regains some composure as FTR toss his belt back to him. Everyone leaves Page alone in the ring, as he's apparently been cast out by all sides.

Alex Marvez interviews Chris Jericho backstage. Jericho talks up the Mimosa Mayhem Match at All Out, and boasts that he has turned Orange Cassidy into a better man.

Orange Cassidy accepts the invitation to watch from ringside. Jericho is amused, and is wearing an OC t-shirt for the match. Bell rings and Jericho gets off to an aggressive start. Janela takes a beating but answers with a leaping shoulder tackle. Janela springboards off the stage into a Codebreaker and Jericho easily finishes with the Walls at 3:26! Good squash, but I'd love to see a proper match between these two under different circumstances.
Winner: Chris Jericho

Jericho continues beating up Janela and busts him open on the forehead. He wipes the blood on the OC t-shirt and throws it at the real OC, which prompts him to charge into the ring. Hager helps Jericho beat up OC, but Sonny Kiss runs in to even the odds, and OC hits Jericho with a tornado DDT! Hager pulls Jericho away from a Superman punch and retreat. OC pops open a bit of the bubbly and dumps it on the canvas, apparently winning this twist series of mind games.

Music video hyping Sammy Guevara vs. Matt Hardy at All Out. They'll meet in a "Broken Rules Match" and Matt will leave AEW if he loses. Back live, Sammy comes out to do his cue card shtick during a picture-in-picture break and Matt glares at him from behind and offers a rebuttal. Sammy will be DELETED at All Out.

Taz, FTW Champion Brian Cage, and Ricky Starks come to the ring to talk. Taz is confident that one of his guys will win the Casino Battle Royal, Darby Allin is dead meat, and Lance Archer cannot deal with them. Jake Roberts and Archer interrupt, and Jake compares them to squirrels trying to chase after nuts. They're joined by Eddie Kingston, Luchas Bros, and Butcher and Blade, and Eddie makes the case for his guys. Jake things Eddie has been drinking. Tully and Shawn Spears quietly stroll by. A brawl breaks out, and Darby Allin charges in to jump Starks, and the ring fills with bodies. Santana, Ortiz, Hager, and Best Friends join the party late. The whole thing devolves into a glorified dress rehearsal for the Casino Battle Royal and just seems kind of dumb. The brawl continues through a commercial and doesn't seem to be going anywhere as they're practicing how to kick and stomp each other to kill time.

They cut away from the brawl for a video package highlighting the recent events with Dark Order and the Nightmare Family. Scorpio Sky and Matt Cardona have been sucked into the feud, and are invested in the Dark Order's downfall.

This is actually a pretty cool match, with Deeb also making her AEW debut. They feel each other out with some chain wrestling. They trade angry forearms and Rosa scores an armdrag and dropkick. Deeb answers with a neckbreaker and traps the arm while driving the knee into the mat. Rosa breaks a half crab, but Deeb hits a neckbreaker in the ropes. During a commercial, Rosa stays in the fight with a neckbreaker of her own. Rosa wins a slugfest and applies a modified chinlock. Deeb breaks out with a backstabber. Rosa survives a flurry and hits slingshot knees to the chest. They trade counters and Rosa hits a DVD for 2. Back suplex by Rosa and a running boot. The Thunder Driver ends it at 9:17. Man, they packed a ton of action and attitude into a tight match. Sign them both now, ***½.
Winner: Thunder Rosa

AEW World Champion Jon Moxley talks to the camera backstage. He seems to know that he has MJF rattled, and all his distractions won't matter at All Out, and he'll have to be the meanest, nastiest version of MJF to win.

Tony Shiavone interviews Big Swole at ringside. Their match at All Out will be on the Buy-in, and Britt won't be able to duck her anymore, so she better be ready to fight her tooth and nail. They're distracted by Reba's unexpected pizza delivery, and Baker assaults Swole from behind with a crutch. Britt shoves Swole's face into the pizza and puts her in the LockJaw.

Sterling is MJF's lawyer and Wardlow has manhandle him to the ring. Google informs me that this is "Smart" Mark Sterling from the indies, but he's pretending to be an untrained wrestler now. Moxley prays for forgiveness for what he's going to do to the poor lawyer. Moxley toys with Sterling and offers a free shot, but he has to physically show how to make a fist. Moxley delivers a closed fist and Sterling flees to the floor. Moxley pretends to offer another free attack but moves to send Sterling through the ropes on a head of steam. Sterling thumbs the eyes and spends too much time celebrating. Moxley quits messing around and serves a vicious beatdown. Moxley returns the eye poke and finishes with the Paradigm Shift at 5:02. I get what they were going for, but this didn't quite land. No rating, not too good.
Winner: Jon Moxley

Wardlow ambushes Moxley and softens him up for MJF, who suddenly doesn't look all too injured. Moxley takes the Dynamite Ring to the face and MJF stands tall ahead of All Out.

Final Thoughts: I think I'm ready to be on the other side of All Out. The faux battle royal and main event segment felt pretty flat to me, but the women's match, Orange Cassidy, and FTR made me glad to have watched.